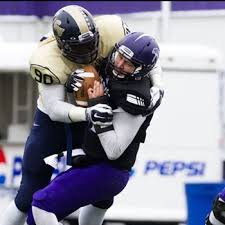 Concordia has great coaches and great people and it felt like a good fit for me athletically and academically.

My parents because I look up to them. They are two great people that molded me into the man I am today.

Haven’t met with any scouts yet

I Played quarterback and middle linebacker in high school

My combination of speed, athleticism coming from my position gives me a good advantage over my opponent, especially when it comes to pass rushing.

When breaking down film I look for anything that would tip off where the ball is going and whether its pass or run. I look at opposing lineman’s stance changes, what part their body moves first when the ball is snapped, what pass rush moves he is vulnerable to, different run blocks that I’m going to see out of certain formations, and the different pass protections

If you could compare your play to one player in the NFL who would it be and why? Aldon smith, Jason Pierre Paul, or Von miller. I compare myself to these players because I believe I have a similar skill set. A mix of speed and athleticism to be a disruptive pass rusher.

One of the biggest obstacles in my life is recently losing my last year of eligibility in college football. I’m going to overcome it by just continuing to work towards my goals and keeping faith.

Usually on game day I get up and eat a nice big breakfast hours before the game. I go back through my film before I get dressed for the game then I just listen to music and zone out.

My biggest strength is my pass rush ability and versatility

Being too eager sometimes to do more than just my job.

After I introduced myself I would tell the GM that they would be getting a player that will lay it all out on the field and give the organization everything I have. Also a very humble, hardworking, home body type of player that conducts himself in a well manner on and off the field.

Ray Lewis and the Ravens