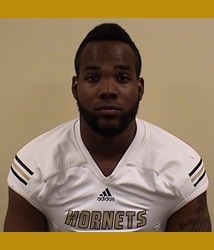 How did you choose your school? Took visits and NDSU showed the most love! They also offered me a full-ride scholarship before my senior year even started.

I would say my big brother Deveon Dinwiddie. Out of everyone I know he is my role model because we got taken away from our mom when we were young and had no one else to look up to! When we didn’t have anything he would find ways to get it! We never had a father figure growing up but even during the hardest times of my life, my brother was that father figure I needed that helped keep me out of trouble. He is the only person that has been everywhere with me through thick and thin and that is why he is an amazing big brother. Both of us are now chasing our DREAMS together!

I haven’t talked to any scouts personally but I know for sure during the season about 15 different scouts were coming to see me. My coach said they all talked good about me especially after seeing my game film and seeing that I could still produce good stats while playing through an injury. Scouts said that is what they look for, D2 players that can play through ANYTHING because a lot of those big time D1 players get hurt and can’t or won’t play through injuries.

Yes, I also played safety, outside linebacker, and nickle.

Natural at playing the game, Hard Hitter, Field Speed, ALWAYS around the ball. I also have a good body frame and am able to put on weight to improve my game.

What offensive formations are used the most, Run-to-pass play ratio, and if I’m in man defense I study the WR different alignments and routes.

I would probably say Paul Cornick, OL that play for the Denver Broncos currently.

A taller Matt Elam, Can cover and also come down hill to lay the wood! Good open field tackler.

Getting taken away from my mom when I was in 4th grade and bouncing from one foster home to the next. I overcame it by keeping my head up and playing football to take my anger out and focus my mind on something else.
Do you have any pre-game rituals? Watch Sean Taylor highlights.
What is your biggest strength? Being natural at playing the game, very PHYSICAL, Special teams is my bread and butter.

I am a little undersize coming from a D2 university with not as much money and I am not very good at talking to the press.

I would be the hardest working player on the team, I would leave everything on the field every game, I would represent the team in a positive manner, I am a team player that will play wherever needed and I would never stop working my hardest or working to get better.

Sean Taylor was my favorite player growing up and my favorite team has always been the Minnesota Vikings.