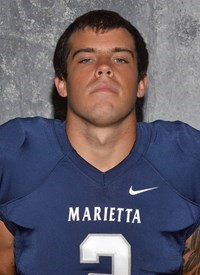 It was the best fit for me and they made me feel at home on my visit, and I also enjoyed their broadcasting program

This always a tough one, but I’d have to say my aunt because she treats me like her son and she’s always been there for me and she’d do anything for me if I needed it.

There honestly haven’t been many positions that I haven’t played defensively. I have play nickel linebacker and safety in the 4-3 and also have played some outside linebacker in the 3-4. I also long snap and short snap.

Knowledge of the game and my ability to play in space. I can play man to man when needed.

Have to know who the QBs top threats are and then begin breaking down routes and how they run them and so on. At running back I like to focus on whether or not the back is going to stay between the tackles or bounce it outside as soon as they can.

Kevin Burke from Mount Union, not much needed to say about the guy if he can’t beat you through the air he can do it with his feet.

I’ve never really taken the time to think about it and I can’t really say that’s one guy that I’d be compared too.

The first time I lost a family member was at the beginning of my junior season and it was a tough time for me and my family, but honestly being on the team and being with my friends and being able to see my family at all my games was very helpful.

Campus isn’t very big but when a lot of people drive to the stadium I enjoy the peace of walking over to the stadium and I usually will just sit at my locker and listen music after getting taped. Normally try to be the first person there.

Size, I’m not by any means the biggest guy out there.

You tell me learn and play something new I’ll do whatever you ask.

Always have to stay loyal to the Cleveland Browns, but I was also a big Eddie George fan when I was younger.

I’ve always wanted to meet Kirk Herbstreit so he’s one, two would be my great grandpa also heard lots of great stories about him, and Dale Earnhardt Jr. he just seems like a pretty cool guy.