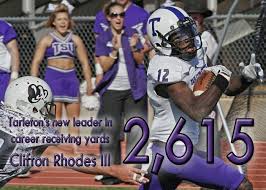 I was mis-advised in high school. Some things went wrong with my class schedule and I ended up not having enough core credits to go to a D1 school. I decided to go to Tarleton State University because I enjoyed my visit and I liked that it was close to home.

My goals for senior year were first and foremost to graduate college and win a national championship. My other goals included winning the LSC, being a top receiver in division II football, and to break all school records.

Have any scouts met with you and if so what are they saying?

I met with a few scouts that came to one of our practices at Tarleton. They were mainly asking me about my height, weight, and my goals for the season.

I have really good hands, I’m not afraid to catch the ball across the middle, I am very physical in the run game, and I am a good blocking receiver. Most of all I believe that my work ethic surpasses the majority of my peers.

Tell us what you look for when breaking down film.

I like to watch and critique myself before my opponents, to make sure I am running clean routes and coming out of my breaks properly. When watching opponents, I like to look to see if he is a physical player, if he has good feet, if he uses his hands a lot, and if he has any tells that give away coverages. 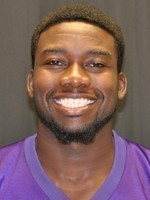 Who was the toughest player you faced?

I can’t recall a particular person who gave me trouble, but I remember that West Texas A&M University was always the toughest defense I faced.

I would have to say Andre Reed. I have great hands, run crisp routes, I’m about the same size, and like Andre I’m great at gaining YAC and have a great work ethic.

My sophomore year in 2012 my dad was diagnosed with stage 4 cancer. We didn’t know how things were going to turn out but by keeping my faith in God and having strong family support I was able to overcome that obstacle. Thankfully, we all got through it and my dad is now in remission.

What system fits your style of play best?

With my style of play I can work with a variety of NFL systems in use today. However, me being a receiver, I would obviously prefer a system that throws the ball more.

My biggest strength would have to be my positive attitude and team mentality. No matter the circumstance I thrive on strong character and leadership to help support my team.

If I was a GM and gave you a second to sell yourself, what would you say?

You will not regret signing me to this organization. My words are only a preview of my actions on the field.

My role model was and still is my dad; Reginald Rhodes Sr. He received a scholarship to play baseball and football at the University of Houston. At U of H he was a running back and slot receiver. He was later picked up by the Pittsburg Steelers as a receiver. Most of all he was my role model because he pushed me to do bigger and better things and was always there for me when I needed him.

The Dallas Cowboys were my favorite team. Growing up in Fort Worth, Texas I was immersed in the Cowboys spirit and the comradery that came along with them. Terrell Owens was my favorite football player, because he never wanted to lose, he was expected to make big plays, he always wanted the ball when the game was on the line, and he always worked hard to improve his game on the field.

What was the most tragic event in your life and how did you overcome it?

The most tragic event in my life would have to be the fact that all of my loving grandparents who helped raise me passed away before they got to see my play collegiate football. Before every game I write the initials of all my grandparents on my wrist tape. It is very important to me to keep them with me on and off the field. The will to achieve my goals and my faith in God is what helped me through their deaths. I only wish they could have been there to see me graduate and hear my name announced during a game.

If you were to have dinner with three people, dead or alive, who would it be?

If my first paycheck is big enough I would pay off my parents house. If it is not large enough to do that then I will make sure I have a place to live while helping to support my parents the best I can.