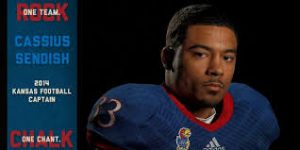 I was a non-qualifier, which caused schools to back up. I went to junior college and became a better student as well as a better football player.

My parents served as role models for me because they shaped me into the person I am today. They taught me right from wrong and how to remain positive at all times.

Several have, and most are saying that I am a smart, instinctive player who takes the game of football seriously. They say that they can tell that I am passionate about the game because of the way I prepare and play.

I played lacrosse, baseball, basketball, and ran the hurdles in track.

The self preparation. Physically, mentally, and spiritually.

Tendencies. Based off of the formations and plays that they run out of those formations. I’m looking at the splits of the wide receivers as well as the splits on the offensive line. I’m honestly looking at any and every thing.

I can’t name one in particular but I’ve played some very talented guys.

Eric Berry because of his versatility in the defensive backfield. The ability to play in the box, to play a deep safety, as well as play man on the slot and rush the quarterback.

I pray and give thanks to God for allowing me to play the game that I love.

I am a guy who will bring leadership to your locker room, I will be a positive representative of your organization on and off of the field, I will give 150% in all that I do, I will do my best to excel in whatever role the team asks me to play whether it is on defense, on special teams or both. If you bring me in on your recommendation, I promise I will not let you down!

Biggest obstacle was finding out that I was a non-qualifier out of high school due to my GPA. I had to learn the hard way that athletics and academics truly do go hand in hand. I attended junior college where I grew both as an athlete and a student. I made the honor roll several times and even made the dean’s list once. Even now, I have maintained a cumulative GPA above a 3.0. I’ll graduate with a double major (Sociology/communications) as well as with an associates degree in general studies.

Sean Taylor and the Washington Redskins

Walter Payton, Muhammad Ali, and Sean Taylor because of the way that they impacted their respective sports and how they influenced those around them.