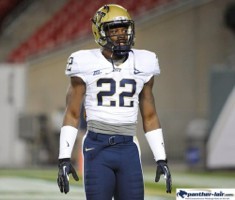 Where do you play college football? –

I chose Winston because I new I would step into a good Quarterback situation with Phil Sims and Rudy Johnson.

My Dad, we been through so much together in Life and seeing him overcome obstacles that most would just give up, its amazing.

Yes I’ve talked to a few most have talked with my coach. They all have said the same thing my speeds intriguing and they love my Return Ability.

Basketball I played until college but growing up I played Baseball, Hockey, Soccer I tried a little bit of everything.

I’ve played Quarterback, Running Back, Safety, and also played a little Corner Back in college

Definitely my speed and my quickness of the line.

First I always look at the safeties just because they can tell you what kind of defensive they are playing. But from there I’m looking at how the corner plays does he like to press, does he play off, can he defend the deep ball. His strengths and weaknesses.

I would say My former Teammate K’Wuan Williams who now plays for the Cleveland Browns.

Honestly I Feel like I have my own style of play but I like to Mimic my game after Antonio Brown just because I’ve had days where I was at Pitt where I would catch him work out and would talk and pick his brain with Wide Receiver questions that I have translated to my play this season.

At a point in my life My father had lost his job and we had no place to live. But we stuck together and kept our faith. When times where low together we made times seem perfect. We ended up moving to Pittsburgh my dad got a nice job. From there on I was determined to make a negative situation into a positive one graduating from HS and College, keeping prayer, family, and having each other through anything and everything.

Just prayer and listening to music to get in Game Mode

I’m someone with big play ability who overcame a bunch of adversity. One thing I’ll do is put my heart and soul on the line to help my squad positively on and of the field.  I love this game.

Deion Sanders without a doubt. Everyone wanted to be like PrimeTime