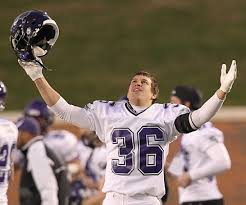 The University of Wisconsin-Whitewater

A handful of Division 2 & 3 schools, was not highly recruited

I decided to transfer after my Sophomore year from Northern Michigan University. Took one trip to Whitewater and just fell in love with all it had to offer.

My dad. From being my high school to not missing a single game to him also playing defensive back in college, he has meant the world to me and my football career.

Other than teams from Europe and Canada, I have not heard a lot. Ability to cause turnovers has been a key point.

Just the knack to always be around the ball and make a play. Causing 20 turnovers in a 2 year span shows that through film study and other teammates doing their job, making a big play seemed to happen a lot for me.

Tendencies and what wide receivers like to do. You can learn a lot by how Wide Receivers get off the ball on run vs. pass. Also knowing their break points and how they want to run their routes is crucial to making a play.

Jake Kumerow. Having him on our team was a blessing and a curse. Having to go against him everyday in practice prepared us for any Wide Receiver in the nation, and it was nice to have him on our team come game time. There’s a reason he’s going to get a shot in the NFL.

Someone like a Tyrann Mathieu. He was noted in college for his play making ability and causing turnovers and not so much his pure athletic ability or 40 time. He made huge plays for LSU when they were needed, and with the turnovers I was a part of on our defensive, I see some similarities there. Also his ability to go from corner to safety is something I see myself being able to do.

Probably transferring from a college in my backyard to going 4 hours away and not knowing a single person on campus. That was difficult going into Whitewater and not knowing anyone on the team, but in the end it was the best decision I have ever made in my life.

Go to our FCA devotional and just listen to music.

Playmaking ability, toughness, and field awareness. When you aren’t faster than everybody, you need to be properly aligned and use proper technique on every snap, other whys you will get beat. Also coming down and playing the run game and getting physical is something I love. There’s a lot of DB’s who shy away from contact, but it’s something I embrace.

Just straight line speed. That has always something I’ve been a little behind on, so it’s an area in which I work to improve on daily.

I am willing to do whatever possible on the field to get a shot. From playing special teams to being a scout player, it wouldn’t matter to me if I were given the opportunity to show what I can do.

Favorite player was and is Sean Taylor, and my favorite team is the Minnesota Vikings.