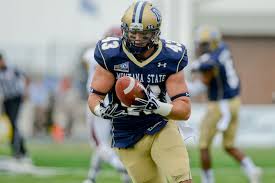 Besides being my only offer, I feel in love with the city of Bozeman and the team on my recruiting trip.

I am from Thousand Oaks, California.

They have talked to my coaches but have said they like my size and ability to read plays.

Growing up I played both football and baseball.

When I was younger I used to play QB but moved to full time LB as a sophomore in HS.

My ability to read a play before you run it. Always being 1 step ahead of the offense.

The little things. A RB depth or distance from the QB in certain formations. QB’s steps linemens steps as well as tendencies a team shows.

I don’t believe my play specifically compares to any one specific LB in the NFL. However I try to replicate how Luke Kuechly plays the game. He always has a head for the ball.

My mind and first step are my biggest strength

That I am a smart and healthy player who would give everything he has for your franchise and compete day in and day out.