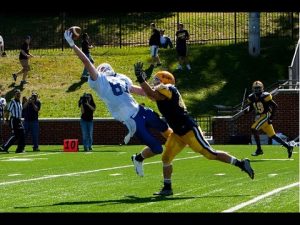 What school did you play for?

Washington & Lee U & Catholic U.

I really liked the feeling at Washington & Lee. At the time I never thought about playing at the next level after college because I wasn’t even 200lbs at the time, so I figured “Why not go to a smaller school and get to play all 4 years?”

My mother, she’s always done everything I’ve ever needed and more. She’s worked her regular job plus tutoring kids for the SAT/school on the side to help pay for school and everything for me growing up so I could just focus on school and football. I wouldn’t even need one hand to count the games of mine she’s missed since little league football and basketball through college.

I haven’t talked to any since last year, where they said I had great hands and body control but need to work on my size and speed. But since then, I’ve put on 10lbs of muscle and dropped my 40 by .2s.

I played DE in high school, and have also learned to long snap this past year.

My hands and ability to catch the ball.

I try get a feel for the defensive end and how he plays, is he shooting gaps, or playing through shoulders, etc. And then watch the LBs/S that would be covering me and their tendencies

Jason Witten, he’s not the biggest or fastest guy, but plays hard and always comes through with good hands when they need him. We’re very similar in stature and speed. So I like watching him and picking up on his little moves to get positioning in the run game and separation in the pass game.

I just put my headphones in and study my packet for the week. I like to go try out the turf and catch some balls before warmups but that’s about it.

My intelligence and hands.

I wouldn’t mind being a step faster in the 40.

You won’t find a player that is more willing to learn and work to improve as a football player.

I honestly wasn’t a huge NFL fan, I was much more into Virginia Tech football because a ton of my family went there and I lived there for a few years while my mom went back to get her Master’s degree.

I’m very interested in sustainable living and permaculture so I would definitely say Geoff Lawton, Jacques Fresco and then maybe Nikola Tesla to get some insight on energy.