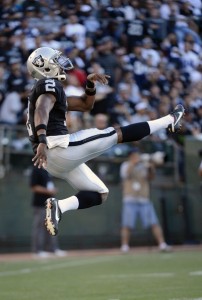 When the Oakland Raiders decided to let Shane Lechler walk for the freak punter Marquette King, many were wondering how he would handle his own.

After the 2012 NFL Draft, the Oakland Raiders signed King to a three-year deal to compete with or eventually replace veteran Shane Lechler. In training camp, King took most of the punting snaps due to an earlier injury to Lechler. King impressed the coaches enough to be kept on the roster but was placed on injured reserve for the entire 2012 NFL season.

With Lechler signing a free-agent contract with the Houston Texans, King competed for the Oakland Raiders punting job during the 2013 preseason with experienced veteran Chris Kluwe. The regular season job was left to King after the Raiders cut Kluwe at the conclusion of the preseason.

King since has been a very solid player, who is not afraid to blast the ball down field.  In 14 games, King has punted the ball 94 times averaging 45.2 yards per punt.  King has put 27 balls inside the 20 and his average hangtime is around 5 seconds.  The big legged kicker is due a contract extension soon, and I would expect the Raiders to give him what he deserves.

If King punts 20 more times (which will be hard considering he has only had 11 in one game of his career) in two games, he will break the record for the most punts in one season.  The Raiders have abused King leg this year, but I know he is enjoying it. #KICKSQUAD