Raiders are a coach away from a playoff team; Trade a 2nd for Jim Harbaugh 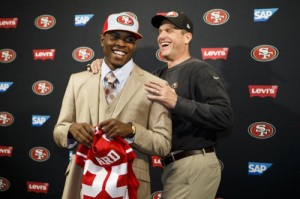 The Oakland Raiders are a very solid team with great player, but they are a head coach away from contending in my opinion. I know this may sound crazy saying this after a 52-0 loss against the St. Louis Rams, but this team is a very solid team.

The Raiders have very good depth throughout their entire roster.  They have a very good young quarterback, with a very good linebacker in Khalil Mack.  If the Raiders can draft Amari Cooper in the first round and trade their second round pick for Jim Harbaugh the team would be a contender.  Players would want to play for the Raiders, which would help in free agency.  The Raiders are not afraid to spend money on players and I feel they would be smart to give up a second for Harbaugh.

The Raiders could offer a 3rd or 4th rounder for Harbaugh that would turn into a 2nd if they won so many games, and I think it would be a great trade.  If the Raiders do that they would basically giving up a 2016 draft pick instead of a 2015.  That would allow them to pick up another football player in the second.  Maybe a cornerback.  If the Raiders can add another big time player like Cooper and get a good coach watch out.  This could be a dangerous football team in 2015.