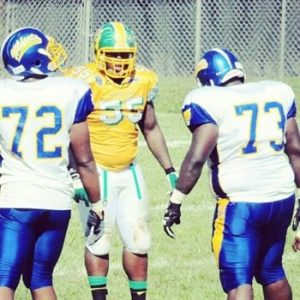 NFL Draft Diamonds has teamed up with Joseph Muia a very solid up and coming scout, to put together a series for our readers called Get to Know. What this series will do is allow you to be a featured on our site, whether you are a freshman or a senior in college. This is a series to help get players at any school gain exposure. We always strive to assist players that have the passion to make it to the next level. So we hope you enjoy our series called GET TO KNOW. Today’s Get to know series will focus on DeShawn Ross the massive Defensive Tackle from Kentucky State University, and we feel at NFL Draft Diamonds, you will want to know all about him.

Well to be honest my journey has been everywhere. I originally chose a junior college out of Illinois called College Of Dupage. After a year, I decided to leave and go to Southwest Baptist in Missouri. I remained at the university for about year and a half, before deciding to come back home. After all of my explorations through these different universities, I decided to spend my senior year playing defensive tackle and full back for Kentucky State University.

My goals were to lead the team in sacks and tackles for loss. I also want to make the All-Conference team/ All American team.

Yes Sir a couple has contacted me they said to keep working and focus more on hand speed and placement and condition.

I think my power, speed, and leverage separates me from other players. Also my desire, prestige, and my work ethic give me a head start on and off the field.

I look to see what some of his tendencies are, is he heavy up top or is light on his feet? Does he give away the plays by his stance or is there some type of secret thing the center and guard does before ever snap?

I would have to say Geno Atkins, for the simple fact he’s not a big guy so he understands leverage and possess great power.

Some of my biggest obstacles were having a baby after my first year of junior college and having to sit out two and a half this season. I count these as obstacles because a child has to be your first priority and football is my first love.

My biggest strength is my leverage, speed, explosion and my desire to never quit.

My biggest weakness is my height, and not staying at one school throughout my whole career.

I would tell them I’m hard working, motivated, determined, and coachable.

My Community and parents were my biggest role models.

My favorite team is the St Louis Rams; my favorite player is Geno Atkins because he overcame all the speculations that you had to be 6’3 to play the position.

My first year of college my brother was killed. When we were younger he always told me you have a gift to play this game of football, and I want you to continue to play this game til you can’t anymore. Til this day I’m striving to keep playing for him.

My family and for a fresh start In Life. I would also put money up for my son’s college.