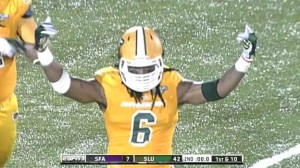 NFL Draft Diamonds has teamed up with Joey Muia a very solid up and coming scout, to put together a series for our readers called Get to Know. What this series will do is allow you to be a featured on our site, whether you are a freshman or a senior in college. This is a series to help get players at any school gain exposure. We always strive to assist players that have the passion to make it to the next level. So we hope you enjoy our series called GET TO KNOW. Today’s Get to know series will focus on Isiah Corbett the hard hitting linebacker from SE Louisiana, and we feel at NFL Draft Diamonds, you will want to know all about him.

10 schools were recruiting me out of high-school including FBS and FCS.

I chose to sit out a year because of academic issues and eventually got it right went to Delta State red shirted because I was ineligible and transferred to JUCO and play 1 year at Coahoma Community College and then transferred to Southeastern Louisiana.

Some goals for my senior year I wanted to show I could do all phases while playing linebacker (covering,rushing,playing in the stack position)

Yes scouts having been meeting with me they tell me to continue performing and everything will take care itself.

What separates me from others is my ability to do it all far as I can play different positions and excel at them.

While breaking down film I look for Offensive Lineman tendencies and back sets.

Toughest player I ever face was Tim Flanders

Had to compare to someone it would be Von miller he is the best at what he do.

Biggest obstacle I had in my life was sitting out a year of football after high school and then getting back to playing football the following year.

System that fits me the best is a 3-4 system.

Biggest weakness probably watching the ball to much

GM have me a second, I would say I will give his organization my all and will do everything in my power to win games for my team.

My role model growing up was my Father

If I had to have dinner with 3 people it would be my grandparents and Bob Marley.