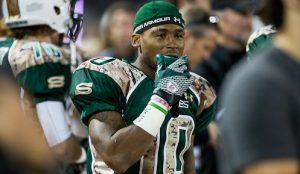 Deion Sanders. He is fly, flashy, and flamboyant. He was knowledgeable about the game of football and I watched him play football as I was growing up.

I’ve talked to about 6 scouts and they’ve all said I don’t play the size that is portrayed on my game film. They all said I play bigger than my stature. They also said that I was a big hitter, which most corners are usually not.

I played baseball, basketball, and ran track when I was in high-school. I basically played any sport that I could.

I have played receiver, running back, and safety 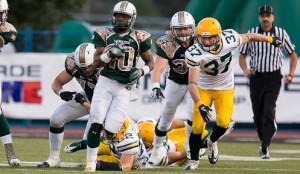 The toughest play I ever faced was D’haquille Williams from University of Auburn. He was a great competitor that was very precise at his position

I would compare my game play to Captain Munnerlyn. We have the same stature and same physical abilities. He’s also a flat-out playmaker.

People telling me I was too short to play football. Being in another country and never being able to see my family. Every time these things came across my mind, I just worked harder and went to the gym to better myself. I used weights as a way to ease my mind.

I normally go somewhere comfortable and quiet. I pray. I kiss my mother’s picture. I listen to a lot of Lil Boosie and Yo Gotti. I brush my hair a couple times and get in my game-mode.

I’m a physical specimen. I love the adrenaline rush that comes with the contact

Patience and having to overcome adversity

I have a winning personality. I bring the team up when they’re down. I have great sportsmanship and have natural leadership abilities. Bottom line, I’m a shutdown DB.

Deion Sanders was my all-time favorite player and I watched the Atlanta Falcons and the Dallas Cowboys.