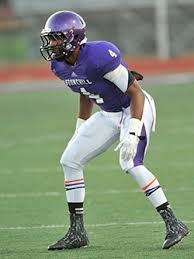 My name is Sterry Codrington.

Around 7-10 schools recruited me out of high school.

I chose my college because of the academics as well as the people there.

I am from Freehold, NJ.

My role model is my mom because she’s the hardest worker I’ve ever met.

Haven’t met with any scouts.

I played basketball, baseball and I ran track growing up.

Prior to establishing myself as a Defensive Back, I played QB, WR, and Linebacker.

My knowledge of the game and each situation on the field. I am very good at using my hands and quickness to defeat blockers. I have great closing speed when I am attempting to make a tackle. I am also very good at tackling in the open field.

I look for tendencies and footwork of the opponent. I look to see what they’re doing when they aren’t getting the ball. I look for ways to outsmart the opponent and confuse them during each play so I’m always a step ahead.

I’d have to say a running back from the University of New Haven.

I would compare my style of play to Earl Thomas of the Seahawks. I pride myself in my tackling ability. I also bring a lot of passion and fire along with my gameplay.

YOU CAN CHECK OUT STERRY’S HIGHLIGHTS HERE

I usually pray in front of the goal post before every game.

My knowledge for the game and my tackling ability.

My size and speed.

I would say that I have a lot of potential as a player, and with just a little help, I could go a long way. I would also make sure that you knew I would work extremely hard and make the necessary sacrifices if need be.

Brian Dawkins and the Philadelphia Eagles