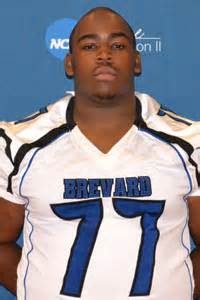 Out of high school I’d say about 12 D2 schools were recruiting me, and 5 D1 schools

I initially chose Bowie State my freshmen year collegiality but I ended up transferring to Brevard simply due to their level of conference competition and their excellent academic programs.

My goals going into my senior year were to lead my team to the championship, improve the football culture on campus, rid of the losing mentality, and to continue to make opposing teams game plan for me.

I’ve received a few interest emails after my senior year this year, but as far as teams physically meeting with me that hasn’t occurred yet. I pray that the opportunity arises

What separates me from other at my position would ultimately be by strength on impact, my ability to get linemen on their heels, and my ability to occupy double teams while allow my linebackers to plug holes and make plays.

While breaking down film on opponents, being that I play defensive line, I look for the tendencies of the offensive linemen. How their hands are placed, how they’re stances are, is someone pulling, are they pass setting, etc. I pride myself in my ability to exploit the linemen’s tendencies

I’ve faced many challenging opponents but as far offensive linemen go, the toughest linemen that I’ve faced would definitely be Matt Reese from Tuskegee University. We both attended NC Tech in Charlotte the year that we graduated high school, so getting to face each other each day was intense at times. Another player that I faced that was challenging would definitely be Bo Cordell; his intelligence got him and his team out of some hot water the 2 years that we faced each other.

Even though he’s retired but not officially, I always modeled my game after Casey Hampton. His strength and physicalness at the line, and his overall ability to finish the tackle or get back to the quarterback is amazing. I feel as if I did a solid job my collegiate career mirroring his game all while at the same time making a name for myself.

The biggest obstacle in my life that I had to overcome occurred during the summer of 2012 in which my father fell ill and my household was shaken up. My father today is healthy and my household has only grown stronger from his illness. My family and I got through the situation through prayer, and I also relied heavily on football for that was what ultimately kept me sane.

I played in numerous fronts throughout my football career. I’m flexible as far as defensive schemes go. While at Brevard I was a 3-4 bully and while recently playing in my senior bowl “D2 vs. NAIA” I started at nose guard in a 4-3 defensive system.

My biggest strength is my ability to muscle my opponents

My biggest weakness would be my peaking and standing up at times to see if the play has developed.

I would tell you that by bringing an individual like me into your organization you’re bringing in a guy who’s coachable, a quick learner, ambitious, a leader, and a great communication guy on the field as far as relying calls. Ultimately you’re bringing in a guy who’s going to going to put on his hard hat each day and earn each and everything thing on that field and in the organization.

Growing up my role models were my parents. My parents set their 20’s aside to raise me, so I personally had the opportunity to watch their sacrifice typical things people their age did in order to take care of their responsibilities. My father juggling numerous jobs and my mom doing the same as well, and still being able to keep their marriage together and running around after me and my siblings; they deserve a gold medal if one were to be given out.

My favorite NFL team is the Steelers, I’m from New Kensington, Pennsylvania so it was either be a Steelers fan or be made fun of by my family members. My favorite active NFL player right now is Aaron Donald, the passion that he plays with and his motor. He’s definitely a great young player that I look to model my game after.

The most tragic event that has occurred in my life was the time period when my father was getting sick. A lot of people would have turned to other things, but my family did a great job of leaning on each other in order to get through such tough times. I used each and every negative that was thrown at me to develop that perfect picture in regards to life and football. I remained positive and I put everything into whatever I did, and dedicated it to my father for they deserve each and everything that I received.

If I were to have dinner with three people it would be Maya Angelou, Joe Greene, and Muhammad Ali.

With my first paycheck I would do 2 things: first I’m donating money to my former youth club and then I’m going to by myself a car nothing to flashy but something to reward myself of all of the hard work that I put in.