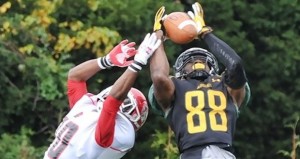 I chose my school because my head coach now was very persistent and show me the most attention And the school had a family environment and It stuck to me.

My role models are people who are leaders ,that demonstrate knowledge, motivation, and determination. Why because these people we label as leaders whether they’re famous or if your a stay at home parent. They are the individuals that lead children, adults etc. so I would say Leaders in general .

Yes I have met with at least 3 scouts. And my coach has spoke with 5 Total. They like what they see think I have the intangibles, good size and speed. They want to see more speed. Also say I run good routes and have great hands. 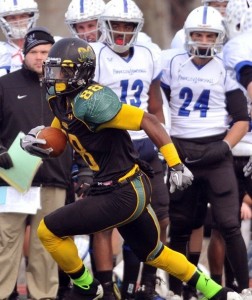 Yes I have , In high school I played a bit of defensive end.

At my position what separates me the most is the way I attack the ball. And not having any fear to catch in traffic across the middle. Also at my position when the ball is in the air I feel like I’m the only one that can make a play. Another thing I believes separates me is my determination to get better and master the craft of being a great wide receiver.

When breaking down film the first biggest thing to analyze as a receiver is the coverage. After lifting the coverages looking for tendencies of a defense , how a Db gets out of his breaks, weather a safety like to bite down hard on play action. And also locating if pressure is coming so you know how you have to break off your routes. In my case I like to breakdown a lot of things to help prepare my mind for everything.

My toughest player I’ve ever faced is my self, because you are your biggest opponent.

With my game I can’t base my game off just one player, because I based my game off a variety amount of players. I like to take different aspects from the Dez Bryant’s, Demarius Thomas , Wes Welker, Reggie Wayne, Antonio Brown, and even the Calvin Johnson . I mean the list goes on and on , I’m not a player who want to be one dimensional so I base my game off a large selection.

No pre-game rituals just like to remain calm and smile a little bit.

My biggest strength is my drive to be the best, whether is gaining knowledge or technique .

A weakness I would say top end speed.

If you were a GM I would say , first I am a competitor and believe that I can succeed no matter the opponent , I believe that I will always have a chance based off my competitiveness from the fire I have to win. I’m the type of person where it’s  110% or nothing.  I am a team player and a tremendous born leader. And I believe strongly in preparation.

Growing up I was a big time Eagles fan. Favorite players was Brian Westbrook