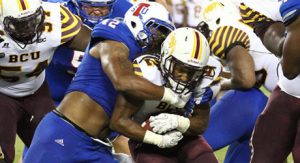 My name is Nicholas Deonte’ Thrasher.

When I was in high school, it was a slow process. I was getting overlooked by many college football teams in the country. At the end of the recruiting process, I ended up with 13 offers. The names of the schools are Tennessee State University, Appalachian State, Georgia Southern, South Alabama, Delaware, Towson, Savannah State, Samford, The Citadel, Alabama State, Tulane, Illinois State, and Eastern Michigan.

I was recruited by Head Coach Rod Reed and Defensive Coordinator Osita Alaribe from Tennessee State University out of high school. The first thing they told me was that I can come to TSU and make an immediate impact on their defense. They also told that I remind them of Rico Council, All-American Middle Linebacker that they had. They also told me that I can be an All-American at TSU. Head Coach Rod Reed mentioned his tackling record that he has at Tennessee State University. I told him once I commit, I was going to beat his record. That’s what motivated me more and to become a TSU Tiger.

I’m from Atlanta, GA. I attended school in Jonesboro, GA

My role model is my dad. My dad is my role model because he inspired me to play football. When I’m around his friends, they always say how good my dad was in football. They called him “OJ” because he ran the ball just like him. But they made me go out there and play better. I want to be better than my dad. He’s always there to support me and he motivates me and gives me encouraging words as well. My dad is just an inspiration person in my and I don’t what I would do without him in life.

I’ve talked to some scouts over the past year. They told me that I just need to get a little faster, be able move my hips and turn to the ball in the passing game.

When I was growing up, I played basketball and track and field.

I have the “nose” for the football. I read and react fast. I know what plays my opponent is running out of each formation and I run to the football EVERY play. I communicate with my teammates as well and I’m a team player. I fight off blocks very well and listen to the coaches and respect them very well. I do everything right and early to everything we have (team meetings, position meetings, practice, weights, etc.). I’ve never missed anything that was mandatory for us to do.

When I’m looking at film, I look at the formation they are in, where the back is located at and the front three (center, and two guards). I also look at the down and distance and see what plays they like running when they come out. I also look at the signal callings that the quarterback gives to the offensive linemen and the running back as well. Basically, you want to find out the tendency and what plays your opponent like doing to execute.

Toughest player I faced in my college career was Jimmy Garoppolo. I would have to say him because he keep plays alive and don’t crack under major pressure. He’s a very good quarterback and knows how to read defense.

IF I could a person in the NFL right now, I would pick Luke Kuechly. I picked him because he very passionate about football and don’t like to lose. He has the “nose” for the football and he is a leader on the team. He doesn’t get into any kind of trouble and do what’s right for the team. He fights off blocks and uses good technique and makes outstanding plays for the defense.

The biggest obstacle in my life that I had to overcome was when I found out that I lose my grandfather on the day when we had a game against Tennessee Tech my freshman year in college. My grandfather and I were much closed to one another and we talked about a lot of things in life. When I found out, I was devastated and didn’t want to play the game. I just wanted to go home and forget about the game. My teammates talked me into playing in the game and I. On the very first kickoff, coach Rod Reed told me to run down there and hit somebody and told me to do it for my grandfather. I ran down there as fast as I could and hit the returner so hard that his chin strap came off. When I did it, I put my hands together looked up in the sky.

All I do is listen to my music and zone everything out and think about the game and what its go take to win the game.

My biggest strength is that I beat my opponents with proper technique. In my eyes, if you have good form in whatever you are doing then you will succeed at what you do best.

My weakness is turning my hips.

I would say this guy is a hard worker and compete at the highest level. This guy never quits and will push players on your team to get better. He can go an extra mile and encourage other players. He’s a good listener and very respectful. He’s very coachable and is discipline. He is also a team player and will do anything to help the team win. All he wants to do is win football games and be able to get treated well

When I first started watching the NFL, my team was the Tampa Bay Buccaneers. The player who I would watch on the Buccaneers is Derrick Brooks. Derrick Brooks was one of the best linebackers in the NFL at the time. I really like his style of play and way he moves.

I would choose my Dad, Grandfather Chandler and Kobe Bryant.