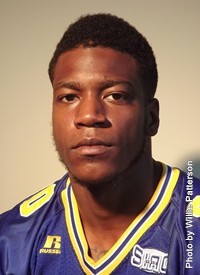 23 school recruited me, 8 made offers.

Coming out of high school, I originally signed with UMass.  I chose UMass because it was a good fit for me position wise – they actually wanted me as a Corner, not a Safety, and it felt like a family on my visit.  I have family in the area as well.

I was born in Long Island, NY and moved to Henry County GA when I was 8 years old.

I look up to my Uncle Van Jakes.  He overcame struggles as a kid such as taking care of his younger siblings and his mom.  He went college on a football scholarship and then went on to have a NFL career with Green Bay and the Saints. He was able to live his dream and take care of his family.  When he retired, he continued his success as a McDonald’s owner and owns a few stores in the Metro Atlanta area.  He always dreamed of his family having a better life, and made that dream come true.

I met with 4 teams in pre-season.  They all said they wanted to see my game and what I had on film

I played basketball, soccer and ran track. I was very good in soccer and had an offer to play in college as well

I believe my size and my footwork separate me from other Corners.

I look for the other teams strengths, and mistakes so I know how to attack their weaknesses. In Receivers I look at their releases, tells, their attitude (what type of player) and their favorite route; On the Line, I look for attitudes, hands and their footwork; In QBs I watch their eyes, what type of player they are, will they take a shot, and their tells.

Dennard Robinson from Michigan.  He not only played QB and made plays, but he also opened up the field for all the other players on the offense.  He was tough, fast, and smart.

I would compare myself to Nnamdi Asomugha because I am physical like him and similar in size. I consider myself a technician and he’s very technical and fundamentally sound.

The biggest obstacle for me was in my freshman year when my mother was diagnosed with breast cancer.  I had just chosen UMass which is over 1,000 miles away from home, and it started to get into my head that maybe I bit off more than I could chew and left my family alone when they needed me.  My Step Dad was out 3-5 nights a week driving 18-wheelers and I was not there to be the man of the house.  But I started talking to my coaching staff a lot more and started talking to my family 10 times more and went home for holidays.  I even flew my mom up for the Spring game just to make sure her spirits were always up and she was happy.  I even had a talk with my Step father where we both broke down and he assured me that he will have her, and that I needed to stay focused because it’s what she would want.  I stayed in communication with my elders, my parents and my peers, and that helped me overcome this major obstacle.

I like to listen to R and B music and read the Bible before pre-game.

I believe my biggest strength is my drive to succeed.

I believe my biggest weakness is that because of my drive to succeed, I push myself and sometimes beat myself up when things aren’t the way I feel they should be.

I would talk about my work ethic and determination and let you know that I am the man to get the job done.

Ronde Barber and the Atlanta Falcons.

First, I would like to have dinner with Martin Luther King, Jr to talk with him about overcoming adversity, hatred and achieving peace. Next, I would say my Great Grandmother, Anna Payne. She helped my mom raise me when I was a baby but she died when I was real young before I got a chance to really know her. I would love to tell her thank you for all she did. Last, would be Ray Lewis because of the way he overcame adversity and is still successful and a role model.