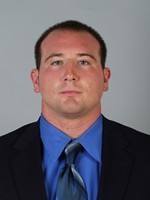 About 8 teams offered me.

Great education, and the location of New York City.

My father and mother because they always do the right thing and they have taught me the same.

I have played every position on the offensive line in college but also played defensive line before college.

My ability to be quicker than most guards, but also have some size.

I played against Rakim Cox, a defensive end from Villanova, when I was playing Left tackle. He has played for multiple NFL teams.

I would like to compare myself to Nick Mangold because he is a hard nose player.

The biggest obstacle that I had to overcome probably occurred this past year when both my grandfather and grandmother past away right before the season. It was hard because I had been so close to them throughout my life, but I dedicated my last season at Fordham to them and never forgot what they had done for me.

My discipline and hard work mentality.

Not the biggest individual.

On and off the field I would never let you down.

The Jets, and one of my favorite players of all time would have to be Revis.

I would like to have dinner with Coach Rodriguez and some of his Miami U buddies to hear about the old days.