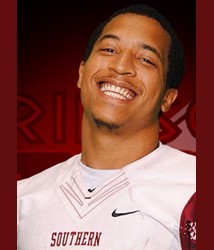 I wasn’t D-1 eligible coming out of Kilgore. And the D-2 SNU offered me and my brother BJ Smith full rides and felt like the coaches and Christian atmosphere would benefit me.

London Fletcher. He showed the NFL for 16 seasons that he could play at his height, from a small school and he always motivated me that hard work and smarts can get you anywhere.

Yes. Mostly asking for tape and informing me about bowl game and combines.

Just middle and outside linebacker.

My IQ of the game, leadership, and passion.

First I break down the formation tendencies and down and distance tendencies. I then study the O line and watch for any giveaways for pass or run. I look to see how fast they like to come off double teams, how much they cut, feet work, and hips. I then study the backs, I watch the first and fourth quarter. I like to see the difference between how hard they run from first to fourth. I look at his steps and alignments also to see if he giving away which runs and pass sets. I study the quarterback to see what his progression his on certain down and distances. I keep up with when he like to keep it safe or take chances. I also look at ball security of all the players. I also check out the tight ends and wide receivers just to know what type of playmakers we were going against.

Deandre Levy. I love the way he play the run so violent but also excels in the pass game. He is an a complete linebacker but his football IQ put him in position to make most of his plays.

Bouncing from couch to couch the past few years back home because of struggles with my mom. But I just keep faith in God and never complained and we overcame it.

Yes. I wear two socks on my right foot.

My IQ and tackling.

I believe I am the next London Fletcher. But I know I will have to work harder than all my competition. I am the ultimate student of the game. I am able to lead through good and bad times. I’m accountable on and off the field. I put the team before me at all times. I’ll do anything you ask of me and will get the job done. I been playing football at a high level my whole life I just understand the game so well I know I can play with the best and make plays for your team if you give me the opportunity.