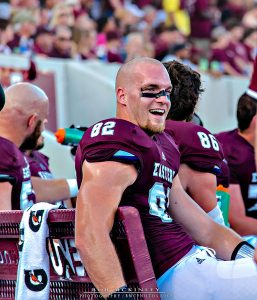 I chose Northeastern because it was my only full scholarship and I really wanted to take that burden away from my parents and I.

My father. He’s done so many amazing things for my family and is completely selfless. He’s where I got my work ethic and determination.

I haven’t met personally with any but I know that most are wanting to see how I play after my injuries. My size leads many scouts to believe that I am a blocking tight end with pass catching ability.

Yea, I loved playing baseball growing up but really switched my focus fully to football in high school.

I was recruited as a defensive end to some colleges coming out of high school but my heart was in TE.

I would say that my passion to dominate as a blocker at TE separates me. A lot of guys want to be Jimmy Graham, but, I’m perfectly fine with being an additional blocker and short yardage pass catcher.

I have a lot of fond memories blocking Arthur Brown while he was at Kansas State. Dude was tough.

I would say Lee Smith of the Buffalo Bills. He’s big, strong, and almost an extra tackle, but, he can catch when called upon.

I would say that tearing my ACL two years in a row was my biggest obstacle. I convinced myself that controlling what I can control would bring me back to being the player I was before. When I knew I had the power to make or break my own situation, I just went all out every day until I was stronger than before and ready to play.

Sort of. Unlike a lot of people, I have to eat a lot before games. Also, I put on my uniform in a specific order and put on my eye black last.

I would say that my biggest weakness will be getting scouts to look past my history of two injuries.

I would say that I am very coachable. I’m not someone who thinks I’m already the best and know everything. I’m always looking to get better and open to criticism.

Growing up I was a huge Jon Ritchie fan because he went to my high school and his face was always breaking open. It looked awesome and he was one mean FB. I was a fan of wherever he was.