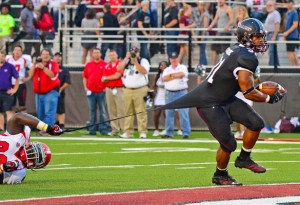 Malcolm Agnew, but I go by a lot of different nicknames…Too many to list here haha.

Honestly, It was a wrap the day that Oregon State offered me. I really felt like God was calling me to attend that university. After I did the research about the university and how well the program had been performing in the past and how everyone raved about Mike Riley, I knew where I was going to go. That was the school I ended up choosing. I had a great two years there and met my future wife at the wonderful university as well before I decided to follow God’s plan for me and transfer to SIUC

My father is definitely my biggest role model. That man has showed me the values of hard work, dedication, having a strong faith, and most importantly, the impact that love has on individuals.

The scouts are just telling me to keep working hard and control what I can control which are my attitude and effort.

Sure did! I played basketball for a couple years (wasn’t great so that dream died quickly) and I also ran track until my senior year of high school. 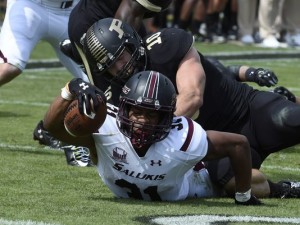 I played cornerback too, although I loved to tackle more than I liked to cover, so I basically was an extra linebacker haha.

I think what separates me from others is my burst through the hole and my balance. My ability to speed through a hole and keep my balance and shake off wimpy tacklers helps me gain big chunks of yardage for my teams!

I like to first take the big picture look and try to see what the defense is doing as a whole. What that means is I take a look at their defensive schemes and their strengths and weaknesses that come with it. After that, I take a small picture view and look at tendencies of certain players, starting with the linebackers and then to the linemen and safeties. Tendencies and any small details that a player can find on film can be the difference between a 2 yard gain, a 20 yard gain, and an 80 yard touchdown.

The toughest player I played against was Mychal Kendricks. Kendricks was a beast when I played against him at The University of California (Golden Bears). He played so hard all the time! There is actually a picture on Google where he hit me so hard I got spun around in the air. That one hurt!

I would compare myself to Mark Ingram! We are similar in size although he has a few pounds on me and he has great feet and great pad level. He also possesses the ability to burst through small holes and use his great balance and power to break tackles

Definitely me transferring from the school that I loved, Oregon State. That was my dream school, so leaving it was the hardest decision that I’ve ever made. I really had to pray to my Lord and savior on clarity if it was the right decision to make. I also had a great support system that helped me with the process of leaving. It ended up being one of the best decisions I’ve ever made.

I do! A few actually. I always make sure I write the same thing on my tape before every game. On my right wrist, I will write the scripture of the day that I have in mind that I feel that can inspire myself and others that see it. I also draw a cross and write the abbreviation A.M.D.G. which stands for Ad Majorem Dei Gloriam (Means for the greater glory of God). On the left wrist, I write my Mother and Girlfriend’s initials, and two of my teammates numbers that passed away (7,92) as those are my biggest prayer warriors I’m bringing into battle. I also pray right before my team goes out the locker room and with a few of my teammates.

My biggest strength is my Lord and Savior Jesus Christ. Without him, I would not have the abilities to play the best game in the World.

Where do I even begin? I can be a little bashful at times, I need to work on being more patient, as a person and as a runner haha. Although I have vastly improved on my pass catching ability and ball security, there is stillroom for improvement to get better.

Lets Change the World and Win some games! (Saying that really fast.)

Favorite team was the St. Louis Rams! My favorite player growing up was My Father, Ray Agnew, my hero!

John Wooden for sure, I would love to pick his brain about how he won 10 championships coaching College basketball. He also was one of the most influential people to ever walk this earth. A true world changer.

Walter Payton: A lot of people don’t realize that as good as Walter Payton was in his Career as a player, he was a better person off the field. Would be a great honor to have dinner with him

Abraham Lincoln: I would love to see what his personality was like in a casual setting. The man outside of the role of being president.