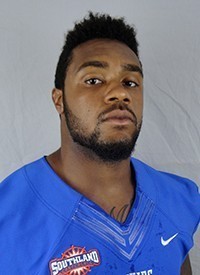 I wanted to stay close to home.

I was born in New Orleans but grew up in Houston.

My mother is my role model because she is one of the hardest working individuals I know.

Not to many scouts know about me, but a Rams scout did come to one of my practices.

Growing up I also played basketball until I got to college.

I played some WR

What separates me from others is that I can line up anywhere on the field and run any routes effectively. I also believe I’m a huge threat after the catch.

When breaking down film I look for tendencies at every level of the defense. Are the DE’s straight up the field or are they just sitting back and reading the play as it develops? Are the backers better downhill players or better going from sideline to sideline? Do the secondary give up there coverage pre-snap and are the safeties flat footed at the snap?

I don’t really remember going against a standout “tough” player, but the best player I have ever went against was probably DJ Hayden, we went at each other a couple times at practice before.

I would compare my play to two players: Jermichael Finley & Vernon Davis. Because of their versatility and the ability to stretch the field.

When I transferred it really hit me hard mentally, but it turned out to be a blessing in disguise because it humbled me.

I just like to listen to my music and relax.

My biggest strength is catching the ball, put it anywhere and I’m going to go get it.

My biggest weakness is playing to high sometimes, when I don’t have a good pad level, it allows the defender to get leverage on me.

My favorite player was Jermichael Finley and my favorite team was the Saints.