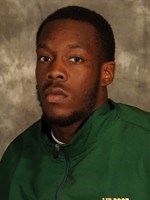 Recruited by 2 schools out of HS

I chose my college because of the proximity to home.

I am from Brooklyn,NY with a Jamaican heritage.

I would have to say that my Mother is my role model because of how hardworking she is and the sacrifice she has made.

I have not met with any scouts as yet.

Growing up I played basketball, and some soccer.

In football, prior to establishing myself as a WR I played Defensive Back and Quarterback.

When breaking down film, I look for the tendencies a DB has when playing into the short side of the field as opposed to the wide side. I try to see when the shoot their hands and find a consistency in the habit. Then I study the coverages and how the techniques the use in different coverages.

I feel as though at my position what separates  me is my ability to block and the pride I take in my route running.

I would compare my play style to Brandon Marshall, he runs great routes, is consistent and is a tremendous blocker

My ritual is saying a prayer.

My strength is that my work ethic.

I’m not quite sure what my weakness is but whatever it is that I’m told I need to work on I will put the time in.

If you were a GM I would let you know that I’ approach the game with the attitude of a blue collar worker. I’m willing to make sacrifices to better myself to help the team. I’m a humble guy but it between those lines I know how to turn it on.

Growing up I never had a favorite team but I enjoyed watching Marvin Harrison and now Brandon Marshall.

Those 3 people would be Bob Marley, Sean Taylor, and W.E.B Dubois