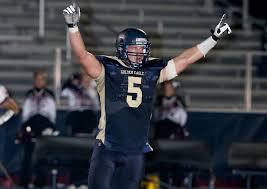 I had a good bit of schools recruiting me. Mostly PSAC schools and some smaller Division 1 schools.

I had it narrowed down to Clarion University, Saint Francis, and Shippensburg University. I felt that Clarion was the best fit for me and the coaches were someone I could see myself playing for.

I would have to say my role models are my parents. They have been so supportive of me throughout my career and have always been there for me. They are the reason I have been this successful so far in my life.

I have met with about 25 NFL scouts so far throughout the season. They all seem pretty interested in me and think I definitely have a chance to play at the next level. A lot of them feel I am better suited to play outside linebacker rather than defensive end.

I played basketball, football and baseball the whole way throughout high school. I also ran track in junior high.

I think my pass rush ability and motor is what separates me from others. I have a great first step and good speed which allows me to get to the quarterback pretty easily. I also have a high motor and am constantly giving 110 percent on the football field. 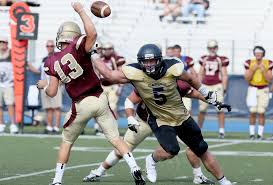 I tend to look for my opponents strengths and weaknesses. I like to see what they are good at and where they struggle. This allows me to game plan and work on all week what I think will work best against them.

I do not who the toughest player I have ever faced but IUP my sophomore year was by far the best team I have ever played.

I would have to say Von Miller because he moves around from defensive end to linebacker as well. He is also a very good pass rusher with good speed and quickness and is relentless when rushing the quarterback. I would have to say that I have a lot of the same traits as a football player.

What was the biggest obstacle in your life you had to overcome, and how did you overcome it? The biggest obstacle in my life I had to overcome was completely dedicating myself to football. When I first came to college I got into trouble and realized that it was only hurting me on the field. I realized to be successful and give myself a chance at the next level I had to completely dedicate myself to the sport of football. Everything I do now is based off what will make me a better football player.

I usually just listen to music and focus on the game.

My biggest strength would be my pass rush ability and my motor.

My biggest weakness would be my discipline on the field. I sometimes try to do too much and leave my assignment to make a play. I have worked on that a lot and have been a lot better at knowing when I can and cannot leave my assignment.

All I need is an opportunity to prove that I can play at the next level. I have the skill set combined with the work ethic that is needed to play in the NFL. I enjoy playing all special teams and have a very high motor on the field at all times. I am willing to do whatever it takes to play in the NFL.

My favorite team growing up was the Pittsburgh Steelers. I also really enjoyed watching James Harrison play the game.