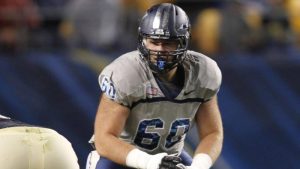 I had scholarship offers from Delaware, William & Mary, Coastal Carolina, and Old Dominion.  I was primarily recruited by CAA teams

Old Dominion gave me my first offer my junior year of high school, which meant a lot to me.  The school is very close to home, it has a solid engineering program, and I liked how the football program was a new start up program.  It gave me the chance to help build a legacy and help the program grow.

My father; He is the hardest worker I know, and he is a man of high moral value and character.

I have met with a few scouts, they like my size and skill but have been waiting to see me play my senior season.

I played basketball, baseball, and wrestled growing up, but football was always my favorite sport by far.

I’ve played center since I started playing when I was six years old.  Along the way I have played a little bit of defense, and I played guard in college.  Center has always been my preferred position, though. 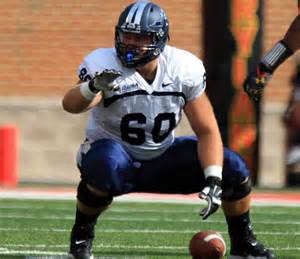 My awareness and “FBI” (Football Intelligence) and my attention to detail, whether it be on the field or in the film room

I always begin by analyzing a team’s personnel, who I will be playing and their tendencies.  I look for things like hand placement, alignment, and favored pass-rush moves.  After that I will watch the overall defensive tendencies, which blitzes they run, situational defenses, etc.

My junior year I played Aaron Donald, who went on to be drafted 13th overall in the 2013 NFL Draft.  I was excited at the chance to test myself against the best competition possible, and it was definitely an eye-opening experience.

My favorite center to watch in the NFL is Jason Kelce, from the Eagles.  He is quick, tenacious, and confident in his play and I always try to emulate that when I play.

My junior year, I tore my ACL towards the end of the season in a game at Idaho. I had to undergo reconstructive surgery and months of arduous rehab, some of the toughest work I’ve ever had to put in. I ended up getting medically cleared six months later. I made it through with the support of my family and friends, and the determination to return to the football field.

My ability to overcome adversity; my junior year I tore my ACL towards the end of the season, and returned in six months to have the best season of my career, capped off with first team All-Conference honors for the first time in a D 1-A conference.  This shows up in games and practice too, I am always able to play the next play and stay positive when times are tough.

Maybe my experience; I played in the CAA for two years and in C-USA for a year.  Although those are fantastic conferences, they aren’t regarded as top-tier conferences, and I often hear that I am a “small-school” player.

I am the safest investment you can make: I am a high effort player, I have shown steady improvement throughout my career and will continue to improve, being an engineering major, I have demonstrated that I have the ability to solve problems and think critically under pressure, which is key for an offensive lineman, and I am a consummate professional that will represent your team with class.

I grew up a Chicago Bears fan and loved watching Brian Urlacher when I was young.  I always admired the passion he had for the game.

John Wooden because he is the best Coach of all time and I value his wisdom of sports and life; Albert Einstein because I would love to pick his brain and learn how he thought the way he did; and my father so he could soak it in with me.