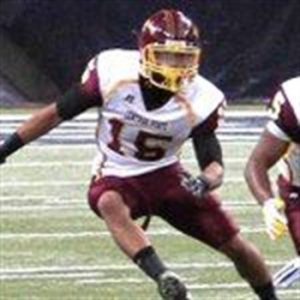 20 plus D1 and D1AA Universities

I do not have a role model

No scouts have contacted me nor have I spoken to any.

I played baseball and ran track

I played running back and Wide Receiver

What separates me from others is my Instant for the ball and having the ability to play more than one position that’s what benefited me throughout my career just being an athlete to the game rather than being one dimensional like other athletes.

First and foremost the formation of the offense, how many receivers, running backs and tightens are in the game. Another thing I look at is the offensive tackle to determine if it is a run or pass play. Next the quarterback to determine his drop steps to see if it is a quick pass or deep pass.

There was no toughest player that I played against in D2 football, its all about dominating every opponent.

I wouldn’t compare myself to a player in the NFL because everybody has a different style of playing the game.

My biggest obstacle was getting my grades right to get out of JUCO to get to a University because JUCO was no joke.

No I do not have any pre-game rituals, I just pray to the lord before I step foot on that game field.

My biggest strength is my instant for the ball and blocking punts and field goals, I was ranked number 2 in blocks in Division 2 football.

I’m here to work, came to far to get denied, I wont be denied..

My favorite player in the NFL was Brian Dawkins and Ed Reed and my favorite team was the St. Louis Rams growing up because my father works for them and I been around them for a while