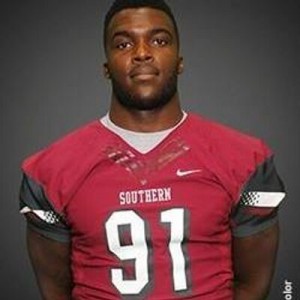 I decided on Jackson st. because they were an FCS school and Miles College was a D-II school. .

My mother. She has a strong faith and foundation in the Lord, very intelligent, and I can talk to her about anything

I’ve only talked two before the season started. They told me if I had double digit sacks, I would make an NFL roster.

I’m very explosive/quick off the line and I have long arms which allows me to gain separation from the offensive lineman.

I watch the offensive lineman stance and footwork. I also look for each formation and play ran, on specific down and distances.

#2 Quarterback in the JUCO.

Not being in school for a semester and working two full-time jobs, to attend another school.

My work ethic, encourage others, and bring energy to my team.

Blaming myself for every a loss.

I’ve been on winning teams and loosing teams but I always remain positive, encourage others, and maintain the same work ethic.