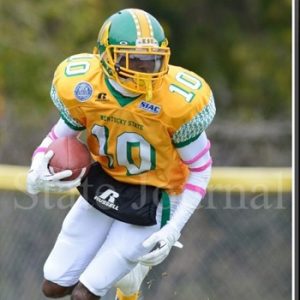 Not many I missed my senior year because of a injury

I originally went to a d3 than transferred to Kansas state and walked on I made the team. During workouts I tore my ACL and I ended up going to a JUCO and things didn’t work out so I went home and somebody told me about Kentucky state so I transferred in

My role model is my grandmother Wylean Murray she is one of the strongest women I know she keeps my family together without her I wouldn’t be where I am today she keeps me fighting and helps me keep faith. She was always like my mother but when my mom died at 14 she really stepped up her and my cousin Javata Murray I was a troubled kid growing up after my mom past, I was lost i didn’t just have a mom now I didn’t have a dad. My mom was everything to me I was her baby and my grandma held everything down she looks after everybody even when she is tired or can’t I respect her more than anybody on earth.

Haven’t talk to any really but Tampa bay storm they want me to come into camp for them. I want to explore me future in the CFL or NFL first but that is a option I just played in the FCS bowl so hopefully that open doors for me

Basketball was my first love played it all my life I was actually better in basketball than football but It changed when I got to college my heart is football all the way now.

I look at everything from the defensive linemen to the defensive backs. I look at techniques their tendencies and do they get lazy everyone has that favorite thing they like to do I try and make it a weakness for them film is important to watch at any level because it doesn’t lie it tells you exactly what they other team is going to do

The toughest player I ever played against was probably myself I say that because I’m my biggest upside and downfall I’m tough on myself when it comes to what I do on and off the field I feel like I can play with anybody who walks this earth with the right opportunity.

I would say AJ green mixed with up and coming star John brown. I say AJ Green because I am smooth like him in my routes and I cover a lot of ground with my speed although I’m not as tall we are similar in a lot of ways and I say john brown because we are same size and can make big plays in open space and we both are fast and explosive

My biggest obstacle was when my mom died sometimes I’m still not over it but I deal with it so much better she was my world so when she left I felt like my world was over I can admit I was a mommas boy she made sure I had what I needed and want nobody could ever replace her she was my mom and my dad. My dad left before I was born so for her to raise 3 boys on her own wit little help I commend her all the way I think of her everyday. I wouldn’t have gotten over it without the support of my family and friends and especially Mrs. Juanita Burton who is like my second mother she stayed on me no matter what even when I didn’t know why she was so tough on me she knew why she didn’t want me to fail and I love her and her family for doing those things for me thanks Mrs. Juanita and Carl Burton.

Don’t really have any I always sit in my locker wit my head phones on tho and listen to music and just talk to my mom ask her to guide me through these battles.

Sometimes I get in my feelings about how things in my life didn’t go as plans I sit back and think a lot my thoughts be so crazy sometimes I just think what if but honestly if I didn’t go through what I did I wouldn’t appreciate things me going to a small school losing my mom not having a dad seeing my brother go to prison for 15 years seeing my family struggle made me want it even more though.

I would say that if you gave me a opportunity to play on your team you wouldn’t be disappointed you would be getting a kid who can do more than just play receiver I can return kicks as well. You would be getting a kid who will give you everything he has day in and day out. I’m not a squeaky clean dude I have had my ups and downs in life and every human does but I am a better person because of it I am someone you wouldn’t regret having on your team

My favorite player was Peter Warrick when he was at Florida state he was who I wanted to be he was quick, fast, and explosive. Nobody could stop him and that’s what I wanted to be a unstoppable football player than he played for my dream college. My favorite NFL team growing up was the Miami Dolphins still, Unless I go to another team than they would be my favorite team

If I could have dinner with 3 people it would be my mom Sheila Murray, my friend who died when I was 15 Edwin Gordon, and my other friend who got killed Bryant “Barfight” Thomas