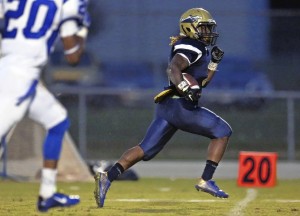 My name is Jacques Alston but everyone calls me Jay Alston

Out of High School, I was really only recruited by two schools

I chose NC Wesleyan because of location, and the visit.

I met the Jaguars scout and he said that I would have to show up and show out at the National Bowl game because of my size.

I ran track and played basketball, but football is my everything so I stuck with it. I played slot receiver and kick returner.

What separates me from others is that I’m explosive, strong, dynamic, and underrated which helps me stay level headed.

Many believe because of my size, I am not a factor, but when I step on the field I’m on a different level from others. I make plays and at anytime  I could break for a big run. It could happen at any moment.

When looking at game film I look for my opponents weaknesses. I study my mistakes, and what I have to work on as well.

The toughest player I ever played was definitely Gary Allen from the All Star Game. He was a physical, and explosive defensive end.

I would compare myself to Darren Sproles, Brandon Cook, and Barry Sanders. They are all small and my size. They make big plays at any moment.

The most difficult thing in my life I had to face was dealing with the passing of my Uncle. I was forced to step up and be the man of the house.

Before every game I leave my cleats un-tied, straps un-buckled, jersey half way up and I never speak.

I feel my biggest strength is my game.  I feel I can do it all.

There is nothing that I can’t do. I don’t have a weakness!

Not everyone get a chance like this. This is my passion and this is what I love to do. I thank God for giving me this opportunity and gift to play this sport. I may be small but I can play. There are a bunch of people bigger than me, but some can not do what I do on the field. I am playing to earn a contract at the next level and hopefully will be able to take care of my family.

My favorite players growing up were Barry Sanders and Bo Jackson. My favorite NFL team is the Philadelphia Eagles.

Three people I wish I could have dinner with are my Uncle, Barry Sanders and Ray Lewis. My Uncle because I miss him and I wish he could see all I’ve accomplished in life. Barry Sanders because he was the best athlete ever. Ray Lewis because he is a great mentor and motivational speaker.