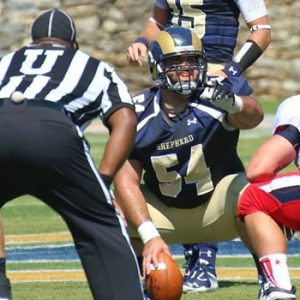 I’d have to say roughly 5-6 teams from both the FBS, and FCS level. Shepherd was the only D2 that contacted me.

I sat down with my parents and decided what was best for me and which school would give me the best opportunity to play football and get a good education.

I am from Annapolis, MD, but I was born in Brazil.

My mom and dad both share that role. They’ve always been there to guide me through life and have always set a good example for my siblings and I.

Yes, I grew up playing basketball.

I believe that my knowledge of the game and my willingness to learn helps separate me from others. My work ethic in the weight room and on the field also plays a big role in separating me from others. 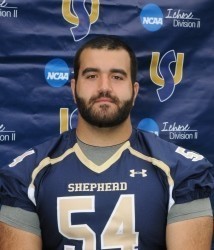 A former teammate of mine Mike Franklin. He had/has it all when you talk about defensive tackles. He was big, fast, strong, and very smart.

It’s hard for me to compare myself to someone who’s probably going to end up in the Hall of Fame, but if I had to pick it would be Jeff Saturday. I say that because we both use our hands well and we both approach the game with a great deal of respect.

Moving to the US at the age of 5. I only knew how to speak Portuguese, which made it very difficult to get around or get anything done. My parents enrolled me into school and from there I just went to work. Less than a year later I was speaking English and doing well in school.

I try to do the exact same thing every week. I eat the same food, I wear the same game day shorts that Coach Cater hates, and I even listen to the same songs.

I think my biggest strength is my work ethic. I do my best to be the hardest worker in the room.

I wish I could say math, but I don’t think that’s what you mean by weakness. I think my attention to detail sometimes gets in the way of moving forward with certain tasks.

Hi, my name is Hussam Ouri. I am willing to do anything, or play any position to make your team. I will work my butt off to get the job done!

My favorite player growing up was Emmitt Smith, and my favorite team is the Dallas Cowboys.

Reggie White, Steve Jobs, and my grandmother who passed away before I was born.