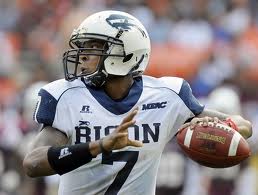 Once I came on my official visit with the new coaching staff at Howard University. They told me I would be able to compete for the starting spot as a freshman. I loved DC and The education I would be receiving.

Father, He showed me what not to do from his mistakes and how to be 100 times better than he was.

Yes and many scouts like me as a QB and thinks I have the talent to play at the next level.

I played baseball up until 8th grade and played basketball throughout my entire career until college. 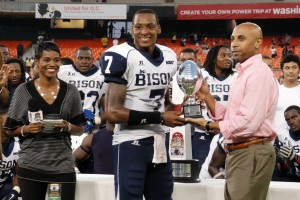 At the beginning of the week you find out the basic coverages, blitzes and fronts. Also what down they like to send pressure or play certain coverages. Then towards the end of the week focus on player tendencies and DC tendencies.

Russell Wilson- because of his stature and his arm strength as well as his ability to get the job done no matter what. Just a leader and a General

Once my close cousin was killed two years ago. My family supporting me and spending more time with me telling me that everything will be ok.

I have a lot of Experience, I can control and run any offense in the NFL and at the end of the day you will get the hardest working, dedicated man who will pour out his guts in order to win.