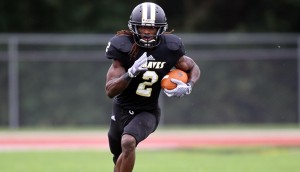 My name is George Whigham Jr.

Out of high school i was recruited above average had a lot of d1aa schools like Univ of Albany and Hofstra.

I am from Miramar, Fl. Born in Miami, Fl

My role model in Life is My Mother i think she is one of the strongest women alive and the most dedicated I know. She took care of me and my sisters with no help got all 3 of us to college and maintain working 2-3 jobs a day and never complain and always made sure her kids were taken care of no matter what and I Love her for that.

I recently played in the FCS Senior bowl  in Miami at FIU stadium and gained some interest in The Raiders And the Rams and a couple Arena and PIFL teams. The Raiders seemed very interested and from talking with them 1 of the most important thing is to get a Pro Day and Run the 40yd.

I Ran Track and played a little Basketball in high school. Track would be my secondary sport.

I play WR and DB and also every special Teams besides FG unit.

I think my speed and my ability to notice defenses is my strong point, but my Speed is what sets me apart from the Rest, Cant teach speed

I love watching film growing up my dad taught me early how to break down film and as a WR I like too look for things like what is the defense top coverage, who is there top corner, does he like to press or press bail or play off, is he physical hows his feet in and out of break and same thing with watching the Safety position.

Toughest player i played against i would say Keith Louis who currently is on the Jets Practice squad. best all around corner i seen in awhile
i think my game is similar to a Steve Smith hes fast, physical, smart, mental toughness and runs decent routes. but recently  been watching a rookie

Wr John Brown also from a D2 school plays for the Arizona Cardinals i love his game he very quick in and out his breaks, runs great routes and the one thing you cant teach he has Break away Speed.

Biggest obstacle i had to over come was a death in the family in 2007. my cousin Alex Phillip died Sept 4 2007 when that happen i lost a piece of me and was ready to just give up on everything i took some time off school stop playing football all at one time. but i just prayed and finally got back on my feet and got in to a JUCO in California Fullerton College and started my life over and honestly felt good to get back on the field because i know he would have wanted to see me chase my dream which is playing in the NFL one day instead of giving up so i had to overcome it.

Before every game i have to face Time my daughter she is 3 and her name is Jaylah Whigham she pumps me up before every game and also I talk to my mom either text or call and after that I’m good ready to go.

My biggest strength I would say is My passion for the Game and I say that instead of something like speed because if you do not love what your doing your already at a disadvantage because you wont be going as hard as me or anyone else because you wont be doing all the things to be great because your passion wont let you.

My weakness is not being patient with my routes doing things to fast instead of letting things play out. need to improve on read and react better.

If you where a GM i would express that with me your going to get a very coachable player I listen very well I am a fast learner, I am honest and also a family man very big on family.  I would treat everyone like my family and most of all my passion for the game I feel is like no other. It’s up there with the greats like Randy Moss, and Cris Carter.  My passion and my drive to want to succeed is beyond a lot of people and coming from a small school. I know a lot about being disciplined.

My Favorite Player growing up would have to be Deion Sanders

Three People I would love to have dinner with would be 1 my cousin just so I could see him again. 2nd would be Cris Carter or Deion Sanders so I can gain knowledge about Football and how to be Successful on and off the field. 3rd person would be President Obama.