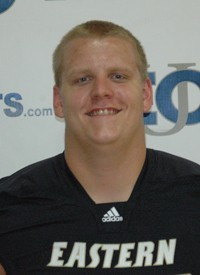 I play at Eastern Oregon University

Not very many school were recruiting me out of high school. Teams included; Eastern Oregon, Montana Tech, Carroll College and Pacific

I chose Eastern Oregon because of the coaching staff and the relatively close location to back home.

Both my mother and my father because of their work ethic and the amount they have sacrificed in order to make it to my collegiate career and the support that they have given me since I left for college.

As of now I have not met with any other scouts.

I played baseball, soccer, and basketball

My knowledge of the game, work ethic, strength, and footwork.

YOU CAN CHECK OUT GAREK’S HIGHLIGHTS HERE

As an offensive lineman I look at each individual match up that I will have against all the players in the box. Their tendencies based on down and distance, any tip offs that they may give away in regards to a defensive line stunt or a blitzing linebacker. I also look at the safeties and if they roll down if a blitz is coming.

Some of the toughest players I have faced would be in the national bowl this year, Happy Iona in high school, and Parker Lawson and Kyle Lanoue during practice at Eastern Oregon University.

I would say Jeff Saturday because we are about the same size and his ability to use his technique and knowledge of the game and not just be successful based off of god given talent.

The biggest obstacle I have overcame in my career would be when I tore my ACL, MCL, and Meniscus in high school and thought my football career was coming to an end. Instead of giving up and determined myself to 4 hours of physical therapy a day in order to come back better than I was before. Continuing to weight lift and gain my speed and footwork back after sitting out was difficult but just put my head down and went to work.

No I just live in the moment and play football.

Size but can gain weight.

I am a young man with a passion to play the game of football, with a great work ethic, and a high football IQ. I love the game!

Favorite player growing up was Ray Lewis and favorite NFL team is the Oakland Raiders.