I played my first three years at The University of Southern Mississippi and my last year at Lindenwood University.

The Citadel and FAMU.

My Receivers coach in high school, Hansford Johnson played Receiver at MTSU and his coach was Larry Fedora. When I graduated from high school Larry Fedora was the head coach at Southern Miss. Hansford had nothing but great things to say about Fedora so it was a no brainer to go walk-on there.

Floyd Mayweather. Nobody has dominated there sport longer then he has and he’s probably the hardest working athlete in sports.

I met with the Seahawks earlier in the year. They came to see me at Lindenwood and they didn’t say too much just was asking about my knee. I heard the Dolphins were impressed at The FCS National Bowl but that’s about it.

I ran Track and played Basketball a little. 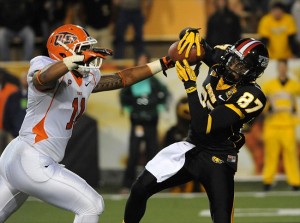 I played a little QB and DB in my little league days.

My route running. Being able to get in and out of breaks effectively.

I break down allot of Wide Receiver tape. I tend to look for different things that I can add to my game.

Jamie Collins. He was a teammate of mine at Southern Miss who currently plays for the Patriots.

Cecil Shorts. Not a very fast guy but a guy that can be really effective in an offense with his great hands and route running ability.

When I tore my ACL heading into my senior season at Southern Miss. I had allot going for me around that time and everything was gone that quick. I thought my football career was over. I just had to keep working and fight through it and I knew something great was going to come out of it.

I listen to Puerto Rican music.

I will always be considered a walk-on and that’s something I’m very proud of. The odds were stacked against me and I exceled. That’s the player you’re going to get play in and play out, a hard worker!