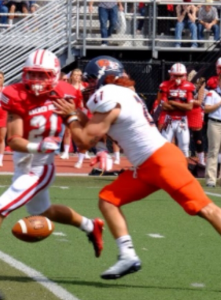 A lot of schools some  bigger some smaller. Everything happens for a reason though.

Coach Susan is a great coach to play for you can tell he really cares about his players. He really made me feel wanted. Not to mention the great academics at Bucknell

My father. He has worked so hard for everything he has achieved in life.

They have been talking to my coach.

Instincts, Desire, and knowledge of the game

I watch the offensive line a lot . I also like to go through different defensive play calls we have and picture  what I would do if that play on film is ran against me.

I played a lot of tough players. I have a ton of respect for numerous guys I played against. I cant just pick one.

Tough question. I do not really like to compare myself to someone that has achieved so much and is already in the NFL . Everybody that is in the NFL is their for a reason. If I had to pick one though Danny Trevathan.

I have had a lot of obstacles as every other person in life has had. I am lucky to have been surrounded by great family, friends, and coaches to help get me to where I am at now.

I’m not sure. For that you would have to talk to my coach or people I have played against.

Generic Answer but I need to get better at everything.

Give me a chance. I will make whatever GM who takes a chance on me look like a smart man. Forget the height, testing, and different measurements. I can play this game at the highest level.

Sean Taylor and the Redskins