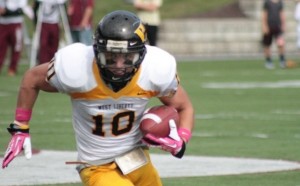 I was recruited by almost all the MAC schools, offered by University of Akron, and recruited by some Conference USA schools

I chose to go to Akron out of high school because it was a Division 1 school and also because of the coaching staff who originally recruited and offered me to play Quarterback.

My dad would be my role model because he has not only taught me what I know about the game of football, but also about life in general.

I played QB my whole life leading up to my sophomore year in college, now I play WR and return kicks/punts

I believe my intelligence separates me, just picking up things very fast. Also, I believe my physical attributes help distinguish me from others.

I primarily play in the slot, so I’ll typically study the linebacker or safety over me, and study their tendencies.

Julian Edelman of the New England Patriots because of his versatility and how he maneuvers his way in the slot.

The biggest obstacle was transferring from Akron to West Liberty, and I handled it by being the hardest possible worker.

Intelligence, quickness, and ability to make the tough plays

Trying to make the big play too often, instead of taking what the defense is giving

That I’m a very smart, hardworking player who will do whatever role the coach asks him to do.

My favorite team has always been the Dallas Cowboys, but I’ve always been a big Randy Moss fan