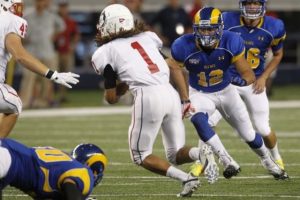 A couple of D1 AA’s schools and some schools from the Pac 12.

I like what the coaches was talking about. Telling me that I can make an immediate impact there. They also have a nice program and facilities and I just wanted to be a part a good tradition at Angelo State.

My dad is my role model because he the that pushes me to be the best at what ever I do and without him I wouldn’t be the man I am today.

I met 2 scouts at my junior pro day and they wished me good luck on the season.

Yes, I played corner, outside linebacker, receiver, quarterback, and running back.

I feel like my instincts when I’m on the field  separates me from the rest because I know what goes on before the play is even snapped and that comes from me watching a lot of film. 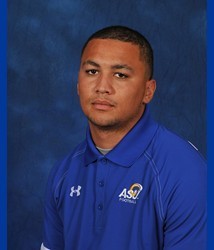 I look for personnel, player and coaching tendencies.

Eric Weddle because he’s a smart safety that can cover and have that knack for the ball.

I’ve been faced with many obstacles in my life and none bigger then the other because I know what faith in the Lord allow me to get through them.

My biggest strength is being able to cover in space and making the big play.

Having my eyes in the wrong spot Sometimes.

Take a chance on me, you wouldn’t regret it.

Sean Taylor and the Oakland Raiders