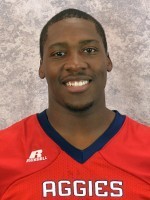 I was recruited by TCU , Iowa State, then I talked to some JUCO’s like trinity valley

I lost my looks from all my other schools because I struggled with keeping my GPA up so I saw OPSU a chance to prove my self and getting a chance to play football.

My mom cause no matter what we have gone through she always reminds me to leave it in the hands of God and he will provide.

I have talked to a the San Jose Sabercats a arena team in California but that is about it so far.

I feel that I am physical but also smart when it come to recognizing what an offense is trying to do pre snap. I also have a 40 inch vertical that I doubt most would have at my position and it’s good for defending against the short passes and screens.

Well I look for what tendencies do the offensive lineman have and see of they give away a run or pass play before they snap of the ball. Also any weakness they might have to moves the other defensive players are using against them.

I would have to say Trey Williams

I would say I’m like Kameron Chancellor just not as fast but how he comes down hill and tackles I would say is how I play.

Losing my little sister at a young age. I got through it by me and my family sticking together and praying to God.

I have to listen to slow jams like R&B before every game. But also pray to God thanking him for another opportunity to play football.

I am physical and smart and versatile when it come to playing other positions on the field.

My speed just because I’m not just blazing fast.

I am a fast learner and I have great work ethic, I will never take an opportunity for granted. I will get the most out of whatever it is I do and I will do it with full effort.

I would say Ray Lewis just because of the type of leader he was on and off the field and how he thanks God for everything. I am a Houston Texans fan.

I would choose my little sister, Ray Lewis, Kevin Hart