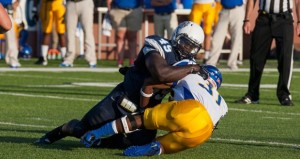 Josh Musick because of his mentality

Yes. St Louis Rams and they were just touching base.

Strength, Get off, Stamina.

Everything, I don’t particularly care about size at all but I really look to see what I do. That can beat my opponent. I look at first step. How aggressive he is at the point of attack. How fast his hands are and how Where his feet are,

It wasn’t so much a player as much as it was just the opposite team game planning and really trying to take me out the play.

I cant say I play like anybody but myself but I will say I do respect players like Clay Matthews. James Harrison. Brian Dawkins. Ronnie Lott. Darren Sproles. Marshawn Lynch. Really just the players that play the way its supposed to be Played.

I face different types of adversity daily but I learned as a kid to just keep my head and work hard.

Sometimes I’m too fast at times and can overrun things.