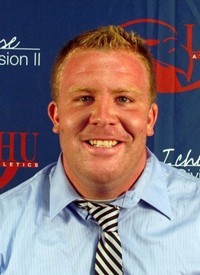 I started my fifth year as the Long Snapper at Lock Haven University. Previously, I was a roster member of the Penn State Football team, where I got my undergrad degree from. However, I spent my freshman year as a scholarship Long Snapper at Indiana University of PA (IUP) out of High School

Roughly, ten I would say. I had a Towson and many D1AA’s offering me a preferred walk-ons. I had interest to Long Snap at almost every PSAC school (D2). I was also considering the elite D3’s as well (Mount Union)

I choose IUP because at the time Lou Tepper was the head coach. I was raised by my mother who has always been my biggest cheerleader throughout my life. My mom raised me on strong Christian values. When we took a visit to IUP, my mom and I noticed the bible on Coach Tepper’s desk. This really helped me with my decision. Also, IUP was the first school to offer me scholarship money. I really wanted to experience that signing day moment.

My role model is Jordy Nelson of the Green Bay Packers. Jordy is actually my second cousin (mother’s side of the family). I have the upmost respect for everything he has done in the NFL, and his work ethic is similar to mine.

I have yet to meet with any scouts yet. Currently, I am down in Miami Florida for the D2 All Star Game (National Bowl) so I hope to get some exposure this week and the weeks to follow.

YES. Sports have been my life. In high school I received five varsity letters in four different sports. I wrestled, played football, baseball, track and field, and lacrosse.

Actually, my redshirt senior year at Penn State, I was a varsity letter winner on the Penn State Track and Field team. I competed in both the indoor and outdoor B1G Ten Championships. My throwing events are the hammer during outdoor T&F, and the 35 pound weight throw in Indoor T&F.

In high school, I was all conference as a defensive end and offensive guard. Since I came to college I decided to specialize and focus on Long Snapping.

If you look at a credible Long Snapping website such as http://longsnap.com/ and compare me to the other long snappers at the Division One level, I am the strongest long snapper entering the 2015 NFL draft. Currently, I am 255 pounds. I am willing to bet that my numbers in the weight room will blow any other prospect at my position out of the water.

Since Long Snapping is so technical, I try and break the snap down piece by piece. I check to see if on each snap: I’ve kept my butt low, kept my back flat like a table top, and followed through with my hands. If I’ve done those three things 9 times out of 10 the snap is pretty good.

As a snapper my time on the field is very minimal. But I faced a ton of great competition in the PSAC this past year. If I had to narrow it down to one or two people I would say it was either Justin Shirk from Bloomsburg, or Cheyney’s Isaiah Fleming. But week in and week out I saw great athletes in the PSAC (D2). That’s what makes it the best division two conference in the country.

Jon Condo. He is the Long Snapper for the Oakland Raiders. He is the best Long Snapper in the NFL. Also, we are both Centre County (Pennsylvania) natives. His body frame is comparable to mine, so that’s why I think my ability best assimilates with his style.

During my Redshirt-Junior year, during a game against Syracuse, a Penn State Long Snapper was injured. I was called to come in, and I was offered a roster spot on the team. I was told I was going to start in the Eastern Michigan Home Opener at Penn State. I had to go through this test they call the ‘dominator test’. I was in Track and Field throwing shape, but I wasn’t in conditioning shape. I passed eight out of ten tests, but I was exhausted. Coach Fitz the old Strength and Conditioning coach at Penn State, came to me and said, ‘Dan, I didn’t know out of shape. I’m sorry, but we have to cut you.’ that was one of the toughest parts of my life. I focused on track and field and finished school. After graduating from Penn State, I was applying for jobs, trying to figure out what to do, One of my best friends growing up, Chris Venturino, his dad (Tommy Venturino) was kind of Joe Pa’s right hand man. He told me his dad and current LHU Coach John Allen were co-workers when Coach Allen was at Penn State, but growing up in the Penn State area, I knew of Lock Haven’s reputation. Lock Haven had the record for the longest losing streak in the nation. However, I felt he needed to keep trying football. So I decided to attend Lock Haven for my fifth and final year. And I started as the Long Snapper and had the storybook ending to a college football career.

The accuracy of my snap

I am a perfectionist and worry too much about the accuracy of my snap, and sometimes I aim and I don’t snap the ball, which hurts the speed a little bit.

I would say that I am the hardest working long snapper entering the 2015 NFL Draft, and if you tell me to jump, I’ll ask how high.

Growing up in State College I was a Pittsburgh Steeler fan. Although the first player I remember cheering for was John Elway. He was humble and a great leader for the Denver Broncos teams in the 90’s.

My mother, my father, and my little sister. Family means everything to me. I don’t get too tied up in politics or celebrities. The ideal dinner for me would be gathering around the table with my family, and sharing memories while creating new ones with the ones I love most