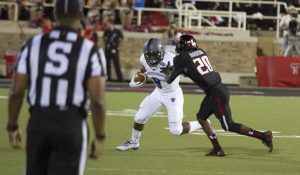 6 teams were recruiting me out of high school

UCA was close to home and it was known for its winning traditions.

I am from Texarkana Tx

My father is my role model. He’s the hardest working man I know. He has inspired me to be the hardworking person I am today. Nothing has been given to me I have worked my butt off for everything.

I played basketball and had college offers but decided to go with football.

In high school I played DB, playing receiver made it easy to get picks if the ball was in my area. 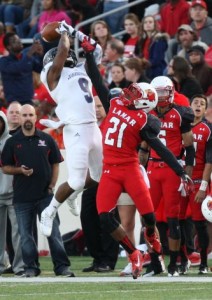 What separates me from others is my ability to think on the go. I’m a smart receiver that knows how to get open. I know that being a receiver is simple just get open and catch the ball but me being able to stop you from stopping me makes me a valuable receiver.

I look to see the DB’s tendencies in man v.s zone. When he’s pressing is it jam or press bail. with the jam technique is he aggressive or does he let you get a release and run with you. In zone does the let you release how you want in cover 2 or is he aggressive and makes you go inside.

The toughest player i have ever faced in would have to be Kendall Wright. This guy was such a freak athlete and he played everything and was good at it.

I would compare myself to Stedman Bailey. he plays way bigger than his size and so do I. When people look at me they assume I’m either fast or play tailback. They would never guess that throughout my college career I played outside receiver and caught a lot of deep balls, fades and all.

Getting red-shirted was hard for me. Coming from being a start in high school to not being ready to play was a big ego check for me. I had to just stay focused and grind hard everyday and put my ego to the side.

I am actually called the quietest person on game day. I don’t talk to anyone, I just listen to my Pandora. I can’t listen to one particular artist the entire time i need a different variety.

I would say my size. People really under estimate my ability to go up and “moss” someone. I really like the jump ball but with me standing at about 5’10 that makes it hard for people to trust my jump ball skills.

Michael Vick was my favorite player and the Denver Broncos was the team to watch.

Martin Luther King Jr. was one brave individual. Denzel Washington is the best actor ever and has never had a bad movie. Jessica Alba who wouldn’t want to have dinner with her.