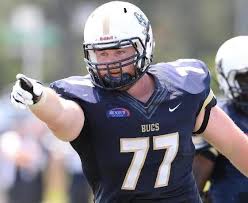 It was the only D1 offer I had coming out of high school.

Atlanta Georgia, but I moved around all over the south east.

My parents are my role models. They work very hard to provide for me and my family. They are the best examples of human beings that I know.

I was really big into wrestling, but I played soccer and baseball as well.

In college I played center, right guard, and left guard. In high school I played every position on the offensive and defensive line.

I have never missed a game due to injury, I have really good footwork and light feet, and my football intelligence is very high.

I watch game film on an opponent multiple times. The first time I watch formations, and how the defense aligns their strengths. That lets me know what to expect from the defense, and if they are not lined up normally I know to expect some type of blitz/game. The second time I watch the personnel. I watch the guys that I am going to be blocking. I watch for slant/angle tendencies, do they play the whole game or rotate a lot, favorite pass rush moves, pad level, etc.

I have played a lot of good players and defenses, but the best defense I have played against would be the SEC defense at UGA. They were a very talented defense.

Maurkice Pouncey, he is a larger center and plays extremely physical and nasty.

The biggest obstacle I overcame in my life was my freshman year at CSU. We lost 11 straight games, and I had come from a successful high school program. I had considered leaving the program, and transferring schools. However, I decided to finish what I started and turn the program around. Myself and my teammates stayed and went from a 0-14 start to being a top 25 nationally ranked football team for our final two seasons. We were ranked as high as number 12 in the nation, and started a dynasty at Charleston Southern.

Yes, the night before every game I shave my head, shampoo my beard, and then watch Triple D with Guy Fieri. Before the game I get dressed the exact same way every time.

Versatility. I was able to play three different positions throughout the season, and play each position just as well as my original position. No matter where I was playing on the line my performance stayed the same.

Not everyone responds well to my aggressive leadership style, so I had to become a more diplomatic leader.

I have three major selling points, Versatility, Durability, and Commitment. I can play either guard or center. I have played multiple positions in the same game. I am very durable and tough. I will and have played through a number of injuries. I am not going to miss a game or practice because I have a cast on my arm, or sprained my ankle. If I hurt my snap hand I will snap with my left hand, it doesn’t matter to me. My third point is commitment. I am willing to play any position at any time. I will do anything for whatever team gives me an opportunity. I will buy into any program, and bleed for any teammate or member of that organization. All I need is an opportunity.

My favorite player was always Jeff Saturday. I loved to watch him run the show with Peyton Manning. My favorite team was always the Atlanta Falcons. Being from Atlanta I always watched them play as a kid.

Mark Wahlberg, because I am a huge fan of his movies, and think it would be awesome to talk with him about all his different roles and movies. Marcus Luttrell, the man is an American hero and I would love to sit and talk with him about the process of becoming a Navy Seal and just all the missions he had been a part of. Nick Saban, he has dominated college football for the past couple of years. I would like to just ask him about how he runs his team and just how and why he does what he does.