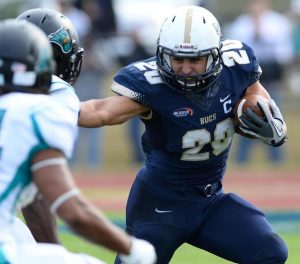 Started at a Junior College in Northern California called College of the Siskiyous, played there 2 years and earned scholarships and chose Charleston Southern University where I finished my last two seasons.

Out of high school mainly walk on offers to D1 and D1aa schools and some money offers from smaller colleges. Chose the Junior College route and got recruited by Sacramento State, Charleston Southern, South Dakota State, Southern Utah, Indiana State, and Boise State.

I wanted to find the best fit for my family and I because I am married and have a 2 year old son. Charleston Southern really focused on providing for my family and being there for us along with the university being Christian faith based, which we thought could help us grow in our faith. At the team they were in a rebuilding stage and I saw it as a challenge and wanted to play my part. Same situation at high school and junior college which involved playing on teams that were seen as under dogs and we eventually turned the programs around.

I am from a small town called Rogue River located in Southern Oregon.

I have plenty of people that I take good from. I like to learn from everyone by always observing the good and bad choices of people and how they carry them selves or how they handle certain situations. The main role model I have been observing my whole life is my older brother Vince Reyes, he has made plenty of bad choices and some good. But he is one of the hardest working people I know when he commits to something. I have observed him turn his whole life around for the better and he continually tries to motivate me daily. Not just him but other coaches I have had the pleasure of playing for include Dave Padilla who keeps me accountable, and Michael Maguire who was a high school coach of mine who stays in contact with me and is always there when I need him. My role models are people who are men I strive to imitate in some way and try to treat others like these men do.

They have just told me to work on putting up big numbers at a combine or our pro day. 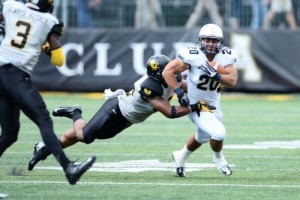 In high school I played both ways, as a running back and linebacker/strong safety. To be honest out of high school I had a few more offers for the defensive side of the ball.

What I believe that separates me is my patience, the way I hit the whole, and vision. I really try to let things develop for me up front when Im in the backfield. With understanding everyone’s role up front, I feel like it lets me be more patient because I feel instinctively where my blockers are suppose to end up and it goes hand in hand with trusting my guys up front. Not only am I patient for these holes to open up but I can hit the hole hard and break through arm tackles when needed along with making a backer miss in the hole. Really try to press gaps and set the blocks up and then hit holes hard! And then the vision that is needed to see all this. The vision of being able to see and feel the whole picture and see what holes I need to burst through. And also having a feel for that internal clock that tells you when things are not going to open up and you just need to plunge into the gap that will get you the most yards to help move those sticks.

Main thing is what kind of fronts they like to line up in against our formations and how the guys in the box play the ball and fit holes. Tendencies are a big focus of mine, especially if the D-Line guys can give away the direction they are going or what they are doing by the way they are lined up. Along with tendencies of linebackers whether they like to hit or not, run well, or are difficult for offensive linemen to get to and completely cover them up. I also like to get a feel for when linebackers are blitzing or bluffing along with DB’s. Just look for their strengths and weaknesses.

I don’t have a toughest player in mind, but I do have a toughest defense I faced, and that was University of Georgia. They were definitely the best defensive I have ever faced and had some overall size to them.

The main thing was choosing to chase my dream. Coming out of a small high school in an area that is not heavily recruited for football, which made it hard for me to make my D1 dreams happen which was my goal. Just wanted to get school paid for, and I wasn’t very knowledgeable as far as helping myself get recruited and knowing how to raise awareness of myself to schools. Had a couple options to go play D2 or D3 ball that a lot of people advised me to do but I believed I could play at a higher level so I chose to take the junior college route. And that decision helped me get to where I am today. The obstacle for me was deciding to chase my dream and learning how to market myself. I overcame it by proving many haters wrong by rushing for nearly 2000 yards at my junior college. And now I find myself in a similar situation coming out of an FCS level school and trying to accomplish my NFL dreams. And all I can do now is trust in Gods plan, market myself, and try to earn an opportunity for a spot at someones camp this next season coming up. I have not given up yet and don’t plan on it.

Main rituals would be to pray and read some scripture before whether it be out of the bible or phone bible. Along with praying with my running backs as a position group.

My biggest strength is having faith in myself even when others doubt me. I don’t let people influence me negatively and I don’t lose sight of my goals.

Biggest weakness is probably that I am too hard on myself and I am my own worst critic. But at the same time it can be a strength because it is what pushes me to work harder every day.

I am a guy who has fought an uphill battle and has been over looked many times but continue to prove people wrong. I am a very disciplined man who cares dearly for his family and leads his teammates by example. I will compete harder than anyone which will raise everyone’s playing level, and fight my way into a roster spot. I am a running back that gets North and South, with good balance, body lean, ball security, patience and vision. I am a consistent performer who gains positive yards. Not only do I run the ball but I can play on every single special teams unit and will sell out for my team. I don’t believe I am above anyone or below anyone, all I am looking for is another opportunity to play the game I love.

Favorite NFL team is the Oakland Raiders whether they are having a good season or not. The player I enjoyed watching the most would be Adrian Peterson because of how explosive he is and  how physical he runs.

Three people is not enough haha.

But if I had to choose three it would be my wife Kacey Reyes, Kobe Bryant, and Jesus Christ.