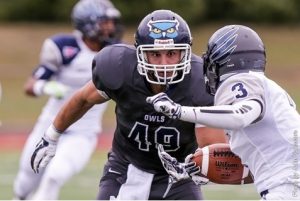 Although I received several accolades as a football player my junior and senior year of high school in the state of Vermont, only local schools showed interest. In result, I decided to attend Bridgeton Academy, which is a preparatory school in the state of Maine. After having success at Bridgeton, I was being pursued by multiple Division II and Division I AA football programs.

My first visit at Southern Connecticut was the day I made the decision that it was the right place for me. The people, campus, coaches, players, and the community were all big factors towards the decision. When I first visited in 2010, Southern Connecticut State University was having great football success over numerous years. Reaching the NCAA playoffs multiple times and being nationally ranked finalized my decision of becoming an Owl. 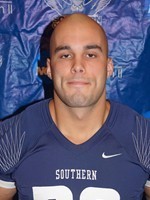 My role model is Eric Thomas. Although I have never met him in person, his speeches have always inspired me to overcome adversity in my life through determination, mental toughness, grit, and heart.

I have not met with scouts yet, but I am in the process of doing so.

I was an All-State performer for baseball and was selected to represent Vermont in a national home run derby. I also played basketball.

Originally at Southern Connecticut State, I played fullback before switching over to MLB. My ability to play multiple positions on the field is something that my head coach at SCSU highly valued.

At 240 pounds, my explosiveness in my linear and lateral movements is what makes me a great player and separates me from other linebackers. I led the SCSU defense in tackles because I had great instincts and am always around the ball. Despite playing MLB, I had five interceptions in my Senior Season because of my ability to cover speedy slot receivers and my superior awareness.   Additionally, I take proper pursuit angles, am a great tackler, play with low pad level, and know how to bring the best out of all my teammates for the good of the team.

When I’m breaking down film, the first thing I look for is the other team’s tendencies. What plays does the opponent like to run on certain downs and situations in the game? What are my opponent’s most common plays in certain formations? What are the most common route combinations in certain formations? These types of questions are constantly running through my mind when I’m breaking down film and preparing for a game. After familiarizing myself with another team’s tendencies, I direct my focus to individual players on the other team. I look for their tendencies, strengths, weaknesses, and things I think I can exploit in the game.

The best player I’ve ever faced was AIC guard Viondy Merisma, who had a short NFL career with the Tennessee Titans.

I would have to say Brian Urlacher and myself have similarities. He was a commander on the field that knew everyone’s responsibility.

Losing my position my redshirt freshman year. I overcame this setback through hard work, extra time spent in the gym and multiple hours in the film room.

Strapping up my chin strap and preparing myself for war physically and mentally.

My on-field awareness is my biggest strength as a football player. Being conscious of whats going on in every situation is something I take pride in.

Having high pad level when I’m fatigued would be my biggest weakness.

Watch me play football! My football motor and drive to succeed is unmatched! Give me the opportunity to prove I belong.