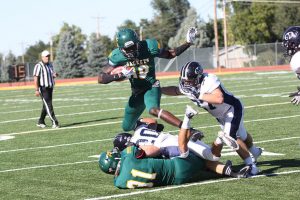 Every year, NFL DraftDiamonds brings our readers the best in depth interviews on the internet. We specialize in giving players an opportunity to showcase their talents on our website. We conducted interviews last year with over 300 plus players. We want you to enjoy our interviews, because when these young men are in the league, we will not be surprised, and neither should you.

None really only played football my senior year

I wanted an opportunity to be able to get my feet wet since i was new to the game so i ended going to a Juco (NDSCS) then got an opportunity at UND before transferring to Black Hills state university.

My role model would have to be my Dad he’s the strongest toughest guy i know and he’s the reason i am who i am today.

I’ve gotten the chance to talk to the Eagles, Raiders,Buffalo Bills and a few AFL teams.

Growing up i was a huge soccer and basketball fan played both growing up.

What separates me from others in my position is my size and speed. i use them to my advantage and also my hunger to get better each and everyday. i know i came into the game a little late so that drives me to what to learn more and more everyday.

When breaking down film, I like to first look for the secondaries tendencies like what coverages they like to roll into, what the corner feel comfortable in whether it is press or off coverage and also, where the safeties are cause that usually gives up the coverage. I also like to look for who the playmakers are if any and who the weak link is and expose them.

The Toughest player I ever faced would have to be CornerBack “Cariel Brooks” of Adams State not necessarily because he was tough but, he had a short memory on the field and regardless of if he was getting beat he always kept bringing it and i like that cause i have the same competitive spirit.

It would have to be A.J Green for the Bengals. He’s the reason I wear the #18 we both play the same in sense that he catches everything thats thrown he’s way, he has a slim tall frame but is still so physical and he’s speed and capability to blow the lid off any coverage and last but not least, he’s play-making ability.

When I lost my mother a few years back it was like my world ended felt so lost and wanted to just throw in the towel but I realized that would be the easy way out and since then, I have used it as motivation it drives me to want to be the best Man i can possibly be for her and my family. it made it grow up quick.

I like listening to music leading up to the game it helps me get my mind right for battle.

My constant hunger to want to learn as much as I can about the game and also the need to perfect my craft because there is always room for improvement.

Is accepting defeat, I am so competitive but, it drives me to want to get better everyday and I like that.

I am a hardworking young man who’s going to give you everything he’s got always I’ll do whatever is needed to help that organization win games and also be involved in the community because its all about giving back and you won’t ever have to worry about me representing the organization in a negative way.

My favorite player growing up was “Chad Ochocinco” and Favorite team use to be the Cincinnati Bengals.