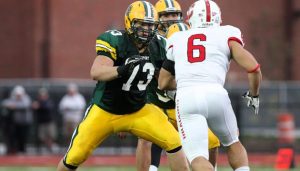 Bruce Doyle the former Brockport offensive lineman had a never quit mentality after finding out that he tore his ACL during the NFL Draft process last year.

Bruce Doyle    @BDoyle_73
A year ago, I learned that I had torn my ACL. Today, the Denver Broncos called asking me to come in for a futures workout. #nevergiveup

While many people would have given up on their dreams, the Cuba, New York native would not give up.  Because of Doyle’s will, the Denver Broncos will work out the 6’4, 305 offensive lineman.

The Cuba, NY native played collegiately for The College at Brockport, appearing in 33 games for the Golden Eagles.  Widely considered one of the top offensive lineman in the New Jersey Athletic Conference, Doyle earned All-NJAC First Team honors in his senior season (2013), helping lead his team to an 8-3 record.