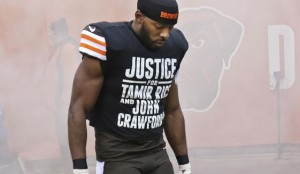 Hawkins wore a shirt that said “Justice for Tamir Rice and John Crawford” on the front and “The Real Battle for Ohio” on the back before the Browns home game against the Cincinnati Bengals, Cleveland.com reported.

Rice, 12, was shot and killed by Cleveland police last month while holding an pellet gun. Crawford, 22, was fatally shot by police on Aug. 5 while holding an airsoft rifle inside a Beavercreek Walmart.

“He’s an athlete. He’s someone with no facts of the case whatsoever,” Jeff Follmer said Sunday of Hawkins, Cleveland.com reported. “He’s disrespecting the police on a job that we had to do and make a split-second decision.”

“He should stick to playing football and let us worry about law enforcement,” he added. “The players don’t know what our job entails. Don’t judge us by what you’re reading in the media.”