Ryan Mallett is ready to seize the moment in Houston; Tweeted this then deleted it

This week the Houston Texans did not get enough out of their quarterback Ryan Fitzpatrick and after the team’s loss Ryan Mallett posted this tweet saying he was ready to seize the moment. 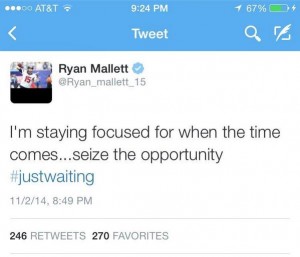 The problem was he later deleted it, which makes you really wonder if the Texans told him to take it down, or what.  At the end of the day, if the Texans want a chance to make the playoffs they need to let the former Patriots draft pick get a shot.  Because the Texans fans cannot keep swallowing a 13-of-27 passing for 203 yards, two touchdowns and one interception performance.